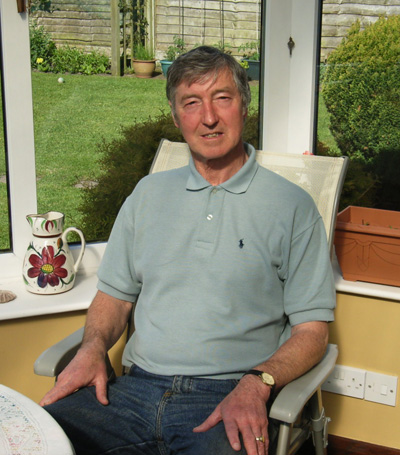 At home in the border country.

I felt like I’d been waiting ten years to track down Hugh McIlmoyle, so it hardly seemed to matter that I was ten minutes late pulling on to his drive in a village that might have been called Middle Of Nowhere.

But this legend of Cumbrian football greeted me by saying he had been asked by Border TV to do a live interview into that teatime’s news programme from outside Carlisle United’s Brunton Park ground. Bang goes another ten minutes.

Our time for small talk and niceties cut down, I asked if I was the first contact he had had with Molineux in the decades since he scored 45 goals in 105 competitive games for Wolverhampton Wanderers from 1964 to 1967.

“No – I went to a Wolves v Southend game around 12 years ago when Steve Bull was playing and John Richards was on the board, then there was London Wolves’ 40th anniversary last year. We met up at Charlton’s ground and it was brilliant to see lads like Terry Wharton, Ernie Hunt, Dave Wagstaffe, John Holsgrove, Mike Bailey, Fred Davies and Gerry Taylor again. Just about the only one who couldn’t be there was Ron Flowers.”

Finding Hugh wasn’t such a big conquest after all, then. The good people of London Wolves had ‘scooped’ me and even persuaded he and his wife to jump on a train for a four-hour journey to the capital.

Sitting down with him in the front room of the McIlmoyles’ house a few miles west of Carlisle was still a minor success, though, if only in my mind. Casual attempts to contact him over several seasons had failed, each number or address apparently having just been vacated in this search to locate one of football’s true nomads.

Then I took the London Wolves route by going through Carlisle United and the rest was easy. So when did he leave that place in Leicester? 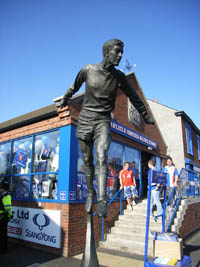 “About five years ago,” he added. “I have left Carlisle four times and come back here four times. And this time I’m staying. I always wanted to return to Cumbria, although it’s difficult when you have been away for so long.

“I have travelled around a fair bit. I had eight clubs in my career and probably ten or more homes. It’s 50 years next year since I came down to England from Port Glasgow, the same area that Billy Rafferty is from. I’m lucky that I can look out of our back windows and see the Scottish hills a few miles away, so we’re quite happy here.

“It’s a lovely area for walking the dog and I go to all of the Carlisle home matches. It’s very convenient for the ground.”

Dave Wagstaffe had warned me that any mention of the statue that stands in McIlmoyle’s honour outside Brunton Park might be met with a response along the lines that only dead people are normally cast in stone. The reply from this slim, fit-looking and very much alive 68-year-old was therefore very upbeat.

“I couldn’t believe it when they took the wrapping off,” he said, his accent softer than may be expected for one from Scotland’s industrial heartland. “There I was, life-size, heading the ball. Fantastic.”

A total of 91 Carlisle goals in 189 matches over three spells, the last of those stints coming in the top flight under the management of Alan Ashman in 1974-75, explains why McIlmoyle is the biggest name in the club’s history, as well as one of the longest. In a career that started on his doorstep at Greenock Morton, he also served Leicester, Rotherham, Bristol City, Middlesbrough and Preston.

Wolves are the main topic of conversation between us, though, so what are his memories of his Molineux years? “My first recollection is of meeting John Ireland in Preston for talks and him apologising for being late. He had a magnificent sports car and said he had been driving at more than 100mph to make up time. 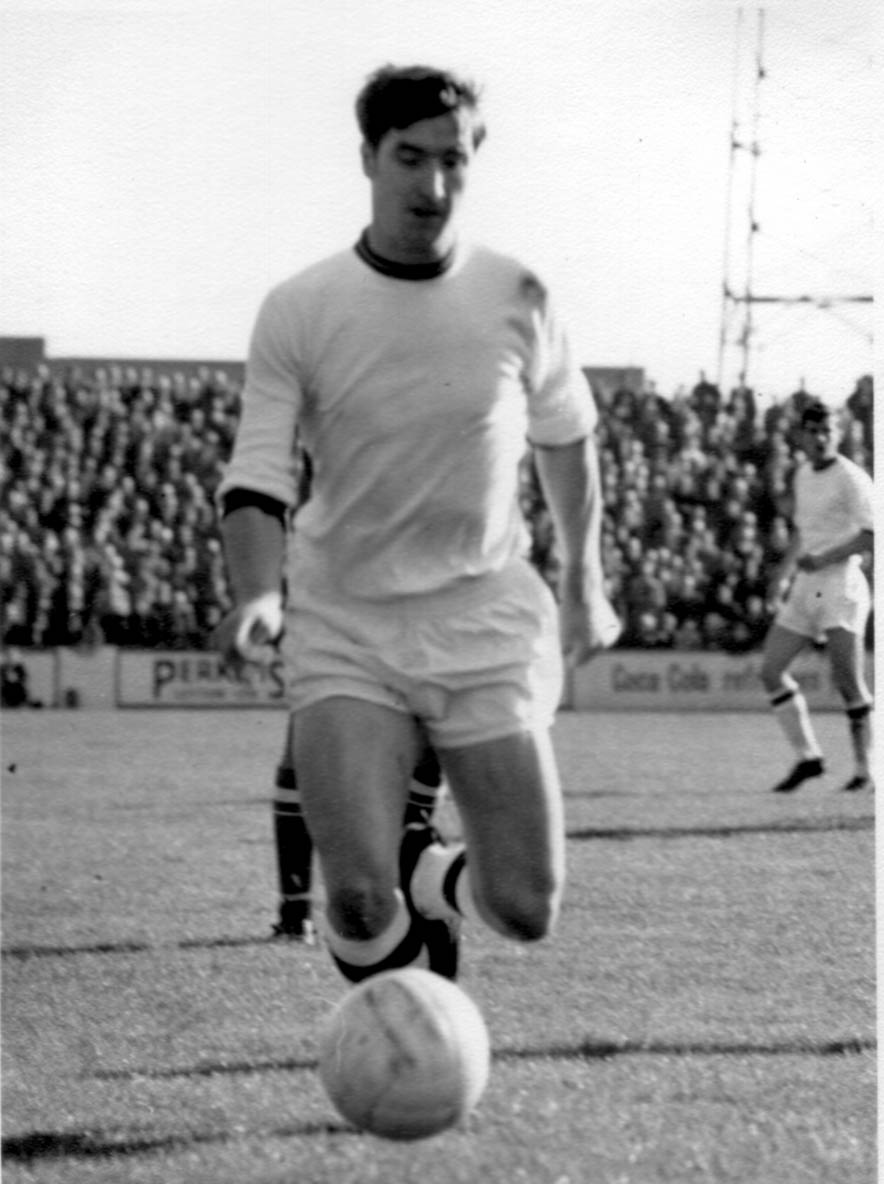 “The great Wolves team of the 1950s and early 1960s had gone and the club were rebuilding. Joe Gardiner signed me and I had a couple of weeks in digs with Peter Knowles, then I lived next door to Waggy. We’d go out for a couple of pints with Terry Wharton and George Miller, who signed at about the same time as me, and Ernie Hunt and Dave Woodfield lived on the same estate in Fordhouses.

“There was quite an influx of players in a short space of time with Dave MacLaren, Joe Wilson and Bobby Woodruff also arriving and you quickly felt Wolves were a big club. I have never really liked big cities, so I was very glad to be there. The games under lights were something special because of all the floodlit history at Molineux and I remember looking at the famous clock on the old stand the night I scored a couple against Manchester United in the FA Cup. It was barely 20 to eight and it was a long time to keep them quiet because they could score virtually at will.”

Matt Busby’s men bounced back to win 5-3 in that quarter-final tie in 1964-65, McIlmoyle’s only Wolves hat-trick having finally decided a three-game marathon against Aston Villa in the previous round – a saga resolved in the snow at The Hawthorns and watched in total by almost 140,000 fans. “We often had a forward line of Wharton, Hunt, McIlmoyle, Knowles, Wagstaffe and could score a lot of goals,” he added. “Terry got a barrow-load for a winger and Knowlesy was a class player, full of confidence and with that bit of arrogance you need.

“Joining Wolves was definitely one of the better moves I made. They were trying to regain their glory years and I’m glad I contributed to them winning promotion in 1966-67, although I had gone before they were sure of going up.”

A silver salver near the TV bears testimony to his membership of that promotion-winning squad, his contribution wrapped up in the highly impressive figures of 14 goals and 29 appearances. But he nearly missed out on his keepsake. Only when Wolves and Bristol City shared a train out of London following away games there the season after did he learn, through Wagstaffe, that there was a little something awaiting him at Molineux! So, given his record and the fact he was only just 27, was his departure in the March of 1967 a little hasty?

“I’m not sure Ronnie Allen liked me and I’m not sure he was keen on Scots. The first thing he did was get rid of George Miller, then Dave MacLaren went. One day, he told me there was someone in his office to see me and it was Fred Ford, the Bristol City manager. When you realised you weren’t wanted any more, it was time to move on.

“With the money from Bob Hatton and me, Wolves bought Derek Dougan, so they did all right out of it. I never did get to play with The Doog. When I was at Leicester a few years earlier, it was well before he signed there.” 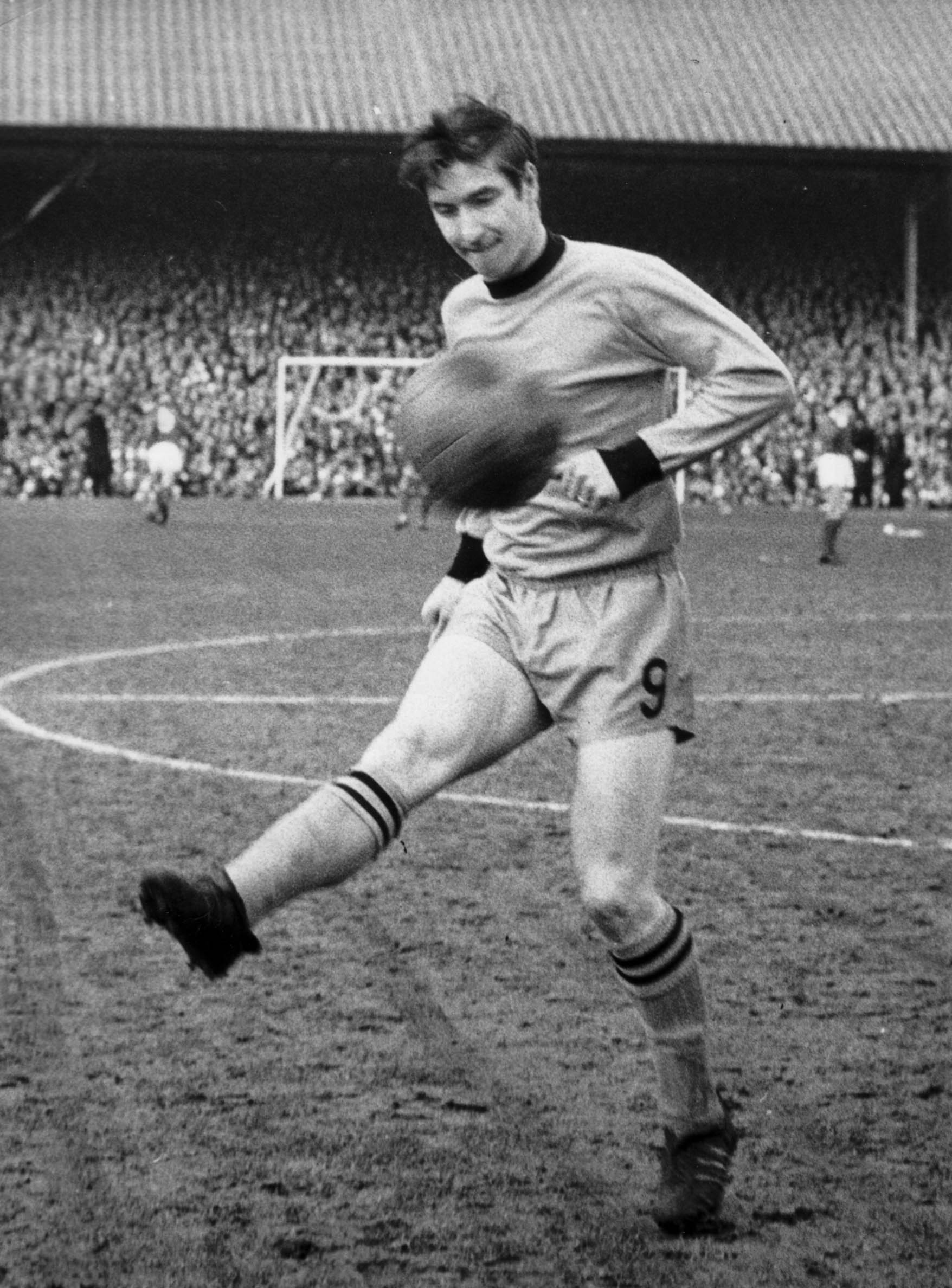 Preparing to face Manchester United at a packed Molineux.

Hugh’s first glimpse of Wolves in the flesh was when he secured a ticket for their 1960 FA Cup final victory over Blackburn, Doog and all. He himself played in a losing Leicester side in the 1961 final against double-winning Tottenham while Blackburn were the visitors at Molineux when he scored his first Wanderers goal (in a 4-2 victory), his debut having come in a defeat at Fulham a month after Stan Cullis’s departure.

My hazy schoolboy memories, as well as the photos on this page, put me in mind of a burly, battering ram of a centre-forward in the old-fashioned mould. So is that a fair assessment? “I wouldn’t say I was a physical player but I was good in the air,” he said. “Strikers were then starting to be asked to hold the ball up, so I was okay as a target man. I played purely up front but moved about plenty.”

And no interview with a player from the distant past is complete without a comparison between their wages and those of today. “My highest ever basic wage in football was £70 a week,” he smiles. “I have six brothers who worked in shipbuilding back home and they earned around the same. The difference was that they worked 60 hours for it; I did two or three hours’ training a day and played a match or two a week – in other words, I was doing things I loved.”