Phil Parkes had a reunion with a colourful team-mate of three decades ago when he attended a sporting dinner at Molineux.

But the long-lost pal wasn’t someone he had lined up with in any of his 382 senior games for Wolves – it was the Liverpool legend Bruce Grobbelaar, who was here for a guest-speaking assignment before flying home to South Africa. The two were colleagues at Vancouver Whitecaps – ‘home’ for ‘Lofty’ during the first two of the five seasons he enjoyed on the other side of the Atlantic towards the end of his playing career.

“My lad bought a couple of tickets for the dinner as a present for me and we had an hour or so with Bruce,” Phil said. “He used to live next door in Canada and would baby-sit for us. Dean is 36 now and bigger than me, so it was strange to hear Bruce recalling how he used to look after him!

“Grobbelaar was my understudy at Vancouver and you could tell, even 30 years ago, that he was going to be a great keeper. He was one of the fittest lads I ever saw, so agile, with a tremendous spring. And he didn’t lack confidence. 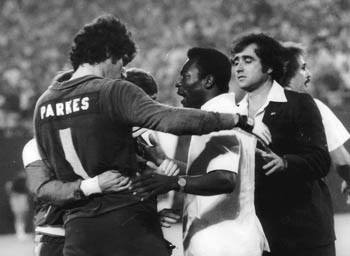 Another memorable meeting in the US for 'Lofty', this time with none other than Pele.

“Mike Bailey was manager of Brighton at the time and I rang him to tip him off, only to be told Mike had just signed Perry Digweed. Bruce went to Crewe instead and might have joined West Brom but couldn’t get a work permit.”

Parkes, who later played for Chicago Sting, San Jose Earthquake, Oklahama City Slickers and Toronto Blizzard, also had the likes of Alan Ball, Willie Johnston, Ray Lewington, Kevin Hector and Trevor Whymark as team-mates with the Whitecaps before his stint at San Jose coincided with that of George Best.

“I really enjoyed my time in the States,” Phil added. “I was taken with the place really from the time I went there with Wolves in 1967. It seemed magical then because a lot of us hadn’t travelled much out of England before.”