Darren Roberts aims to show there’s yet more life in the old legs after scoring a second notable Wolves hat-trick, almost 16 years on from his first!

The striker made big headlines in September, 1992, when he hit three goals in the first half of his full League debut for Wanderers – a stunning 4-0 victory at Birmingham in front of the live TV cameras.

The passing of the years has clearly not taken away his scoring knack because he delivered another televised treble when Wolves won 6-2 against Aston Villa, the club he supports, in the final of the Midland Masters tournament at Birmingham’s National Indoor Arena this summer. 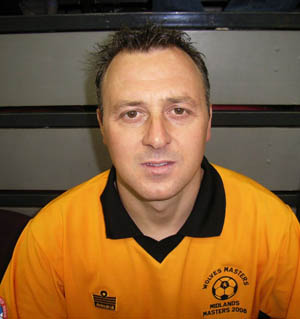 Darren Roberts - not finished yet.

“I’ve started back with Sutton Coldfield this season and hope to give it one last blast,” Roberts told us. “I’m 38 now and my aim was to lose a stone and a half, so I have been running up and down the hills with Paul Devlin to get myself fit.

“I have been out of it for a couple of years really but I’ve got a lot of experience to fall back on and this Masters tournament has whetted my appetite again.”

Roberts, who scored two more Wolves goals in the other 20 or so games he played for the club before embarking on a long journey that took in Hereford, Doncaster, Chesterfield, Doncaster, Peterborough, Exeter and a host of non-League clubs, is now on a different tour of duty. He travels the country servicing soldiers’ homes as a gas engineer for the Ministry of Defence.