Radio Fit For The Royals

Michael Mixes It At The Mic 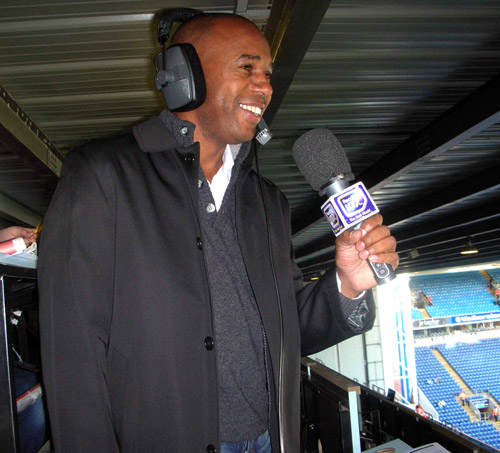 Checking in for duty at the Madejski Stadium.

Michael Gilkes, who lined up as a left-winger or left-back during his two years at Wolves in the late 1990s, is showing similar versatility in his post-playing career.

The 43-year-old Londoner now works for the sports team at Reading 107fm and attends all games played by a club for whom he made 393 appearances before moving to Molineux on deadline day in 1997.

He also offers his views over the airwaves to fans on sports programmes on Monday and Friday nights and no doubt has a sizeable following of listeners. He remains a legend at Reading and polled more than 80 per cent of the vote in his favoured left-wing position when supporters were asked to nominate their favourite Royals side of all time.

Gilkes, who also later served Millwall, became a Barbados international some time after the last of his 39 Wolves outings and perhaps used those trips to the Caribbean to hone the tastes which are given an airing when he is able to indulge another of his passions.

He presents a two-hour music show each Sunday afternoon on Reading fm called Just Gilkes and promised: “I love my music but serve a wide variety of styles and artists. I don’t just play the stuff I like!”