Much has been said, with Paul Ince’s return to the Premier League, about how many of Sir Alex Ferguson’s former Manchester United stalwarts have followed him into management.

Steve Bruce, Roy Keane and Mark Hughes already occupied top-flight hot seats while, from the Aberdeen side Ferguson led during his pre-knighthood days to the greatest era in their history, Gordon Strachan, Alex McLeish and Mark McGhee have embarked on similar journeys.

But there’s a revealing conclusion to be drawn, too, from a look at career paths much closer to home. Right here in the West Midlands, football’s bibles show just how many Wolverhampton Wanderers players have also stayed in the game since their playing days – and in many cases filled the gaffer’s chair at their respective clubs.

How’s this, for a 4-4-2 line-up with substitutes, even excluding Ince, of former Molineux men who have graduated to management or senior coaching jobs in the last ten years? Places are ‘awarded’ on the basis of latter-day career progression rather than playing ability, with the individual’s most prominent post(s) to date appearing in brackets. 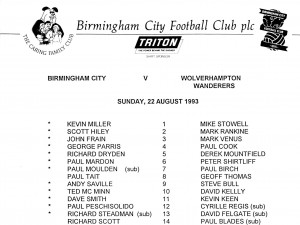 The impact of Claridge and Paatelainen at Molineux may have been minimal while Robert Kelly – later to return and spend many years as a coach with Graham Turner and Graham Taylor – had his playing career at the club wrecked by injury. But all the others played a substantial number of games for Wolves as first-choice players. 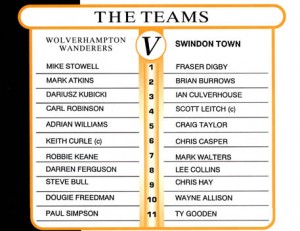 Two line-ups from specific matches in the last decade and a half have come to the notice of www.wolvesheroes.com as being particularly well-stocked with players who became managers and coaches. From the team who faced Birmingham at St Andrew’s in August, 1993, Derek Mountfield is the only player not previously mentioned in this article. He had a spell in management in Ireland with Cork.

From the second side, four and a bit years later, Dariusz Kubicki, a Polish full-back who briefly served McGhee’s Wolves in between spells at Aston Villa and Sunderland, has returned to his homeland to coach Legia Warsaw and Polonia Warsaw, and Dougie Freedman spent last season working as reserve-team coach at Crystal Palace under Neil Warnock. Robbie Keane and Carl Robinson, like Freedman, are still playing and would also be seen as likely contenders to eventually enter management. That would mean an entire 11 having gone into prominent coaching or management positions with senior clubs.But how rare is it that nine have already made the step-up?

If you look at Wolves’ 1974 League Cup winning team of Gary PIERCE, Geoff PALMER, Derek PARKIN, Mike BAILEY, Frank MUNRO, John McALLE, Kenny HIBBITT, Alan SUNDERLAND, John RICHARDS, Derek DOUGAN and Dave WAGSTAFFE, only the skipper Bailey (with Hereford, Charlton and Brighton) and first goalscorer Hibbitt (with Walsall and Cardiff) ever got to manage prominent clubs, although the substitute Barry Powell has been in coaching at various levels for many years.

A glance at the club’s 1980 team of Wembley winners reveals a similar story. Of Paul BRADSHAW, PALMER, PARKIN, Peter DANIEL, Emlyn HUGHES, George BERRY, HIBBITT, Willie CARR, Andy GRAY, RICHARDS and Mel EVES, Hibbitt and skipper Hughes (the latter with Rotherham) were the only ones to become League managers, match-winner Gray holding a senior coaching position at Villa before deciding that his future lay on the other side of the camera.

And there was a small ‘conversion’ rate among England’s 1966 World Cup winners as they thought about switching to the dug-out while only a relative handful of the Wolves greats of the 1950s glory years were seen in the game again. Billy Wright had a four-year spell as Arsenal manager that was considerably less successful than his halcyon days at Molineux but the nearest the rest of them went to a boot-room career was the many years in coaching spent by Bill Shorthouse (largely with Wolves), a few seasons at Albion for Jimmy Dunn, Ron Flowers’ stint as Telford boss and George Showell’s long service with Wrexham, primarily as a physio.

“There weren’t the opportunities then for players to go into coaching as they now do,” said Northern Ireland-based Sammy Smyth, scorer of a memorable individual goal in Wolves’ 1949 FA Cup final victory over Leicester. “We had Stan Cullis as our manager, then Joe Gardiner performed a whole range of duties as his coach, including running on the pitch with his sponge to treat injured players. But there weren’t many other jobs to be filled.

“And we had earned nothing like as much as even ordinary players do today, so we had to be moving into another profession as soon as we finished playing, if not just before. I had a couple of years managing over here in County Down but not with any of the leading lights and had to work elsewhere when that ended, first in bookmaking and then for Slazenger. Very few of us were able to carve out a proper career in coaching or management.”

Today’s retiring players may have to sit more badges and gain more qualifications than their predecessors ever did but at least many of them do so from a position of financial comfort which allows for a little classroom time.

All of which tells us that Wolves were at least signing and grooming forceful or inspirational personalities in the 1990s and late 1980s. But it sheds no light whatsoever on the mystery of why the club failed to make it to the Premiership during that bountiful decade of spending.