A Scoring Spree In The Sun 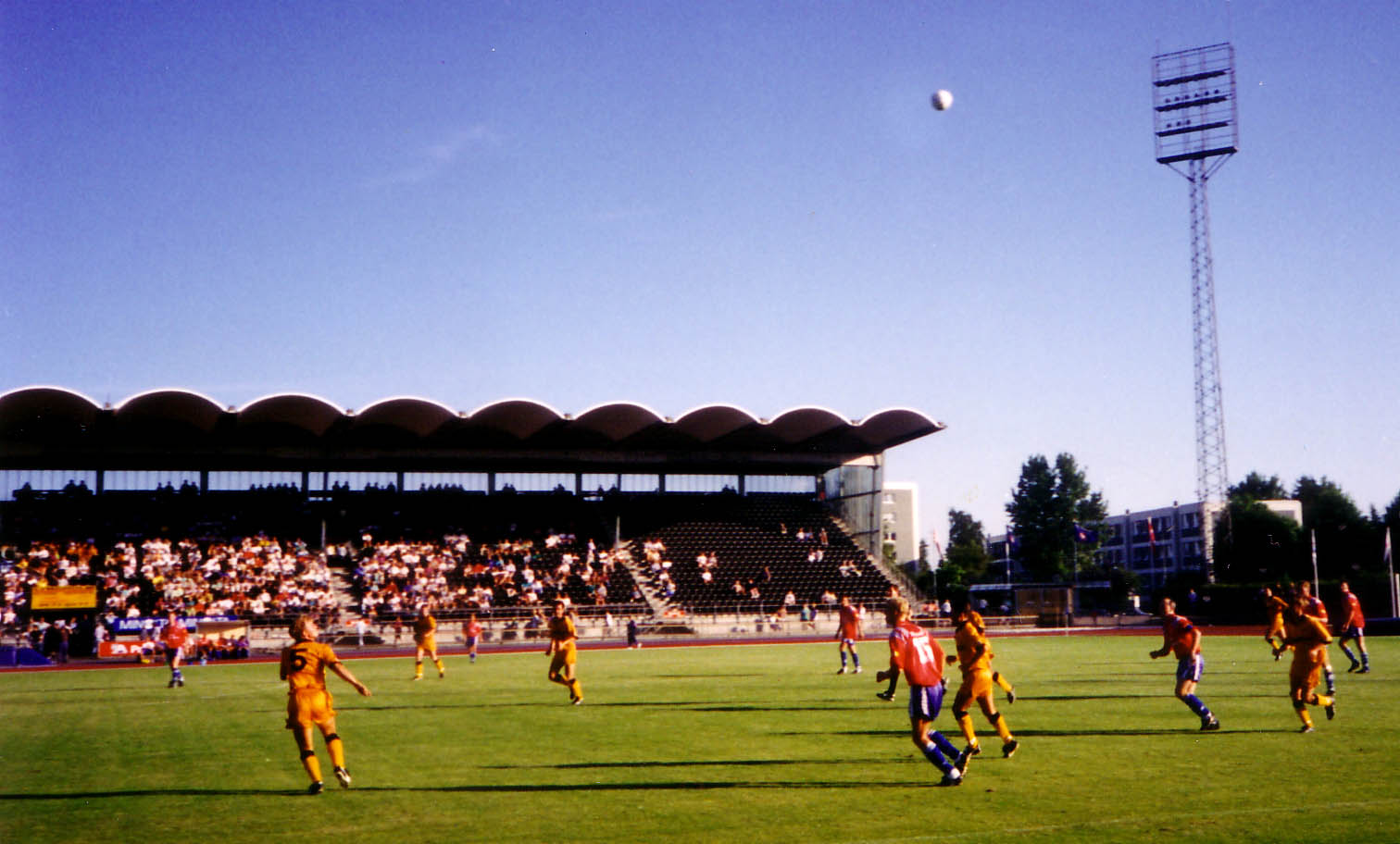 No 5 Paul Blades keeps his eye on the ball in Wolves' victory over Hvidovre in Copenhagen.

It was a trip too many for Graham Taylor, who didn’t really want to be there at all. By the time he was appointed by Wolves in the spring of 1994, the recently deposed national manager was done with airports and language barriers, and was going through a phase of believing that the best journeys were those he could make without the need for his passport.

At the end of the following season, he would make a point of telling readers of Wolves’ match-day programme that his 1995 summer holiday was to be a two-week walking break in Yorkshire. And the club’s pre-season tour after his return from the dales wasn’t to take them to Scandinavia, Austria, Germany or any of the other places that football teams often descend on – but Buckinghamshire and Kent!

Three and a half unhappy years with England had taken Taylor all over Europe and beyond, so he could have done without learning that Graham Turner had committed the club, just before his own departure, to a pre-season tour of Denmark and Sweden in July, 1994. It was nevertheless a voyage of discovery and much interest as Taylor had signed Aston Villa wingers Tony Daley and Steve Froggatt over the close season as well as young Millwall defender Neil Emblen, and was longing to put his imprint on the squad.

The trio were in a 20-man party whose opening game was in Copenhagen against a Hvidovre side Wolves had also visited in the late 1970s during Sammy Chung’s reign as manager.

The performance against Peter Schmeichel’s old club was nothing special but a characteristic brace by Steve Bull just before half-time brought a 2-1 victory in a match marred by the harsh sendings-off of youngsters Jamie Smith – until then unseen at senior level – and Lee Mills. “Got yourself a nice story there, haven’t you?” said Kevin Keen, with a wink, as he saw me waiting outside the dressing room afterwards.

Wolves made the short hop to Sweden the following day and were in action within hours of their touchdown, a 6-1 thrashing of fourth division Solve on the south coast being built on strikes by Daley (2), Mills, Froggatt and Robbie Dennison before Dennison delivered the goal of the night late on.

During the ten-day stay across the North Sea, fans in replica gold and black shirts turned up not only at matches but also at the side’s training base, only ten miles or so from Solve’s tiny ground. And it was there that they appreciated the one-man cabaret act that is Steve Harrison, Taylor’s coach at Villa, England and Wolves, and in more recent times a long-serving member of Gareth Southgate’s Middlesbrough backroom team. 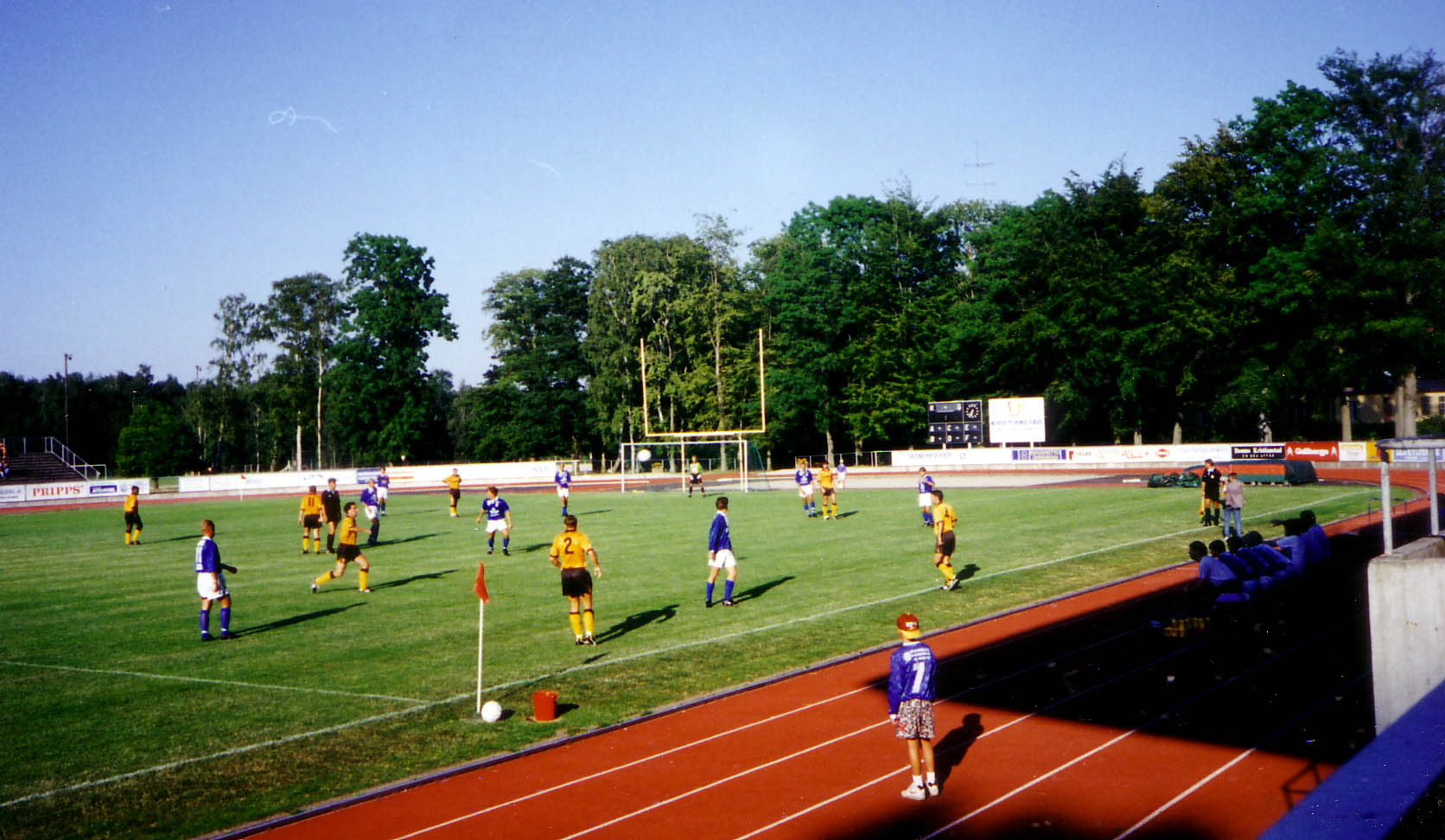 Paul Cook on the move as Darren Ferguson prepares to take a throw during Wolves' 2-0 victory in Kristianstad. The no 2 is Darren Simkin.

Skipper Peter Shirtliff, who had had to fly to Scandinavia with physio Reg Brassington on a separate plane because of over-booking, was among the first subject to the Harrison humour. On being spotted dripping with sweat on one of the endlessly hot days, he was asked: “You been caught in a monsoon there, Pete?” The coach proved himself a brilliant impersonator of George Best and Bobby Charlton as well as raising a laugh at a service station stop during which Taylor had told the group to help themselves to whatever they wanted as he would be at the back of the queue ready to pay. Harrison appeared loaded down with spark plugs, batteries and bulbs as well as fruit and drink.

Shirtliff and Bull missed the game against Solve but returned for the two-hour trip to play a Saturday afternoon game against Smedby, a division three side who were swept aside by a high-tempo performance of much promise. Bull matched the five-goal blast he had once produced against Peterborough’s reserves at Molineux by going close to the first double hat-trick of his career, his star contribution being supported by three goals from Lee Mills and one from Andy Thompson in a 9-0 slaughter that suggested the punishing hard work on the training ground was starting to pay off.

The going was much tougher two days later when Kristianstad provided the opposition on a stifling evening that helped show why Taylor had been prepared to splash out £1.5m to sign Daley from his former club. Wolves were made to sweat, in more ways than one, by the division two hosts, who gifted a first-half goal to Bull – his eighth of the tour – but then caused plenty of scares of their own before Daley cut in from the right to score with a brilliant left-foot shot from 25 yards.

Alas that was the last Wolves supporters would see of the England winger until the autumn as he hurt his knee in training the following day and sat out the final tour fixture, against Asarum. Taylor, who had just appointed Barry Holmes as physio to replace Paul Darby, often worked with his players during the tour morning and afternoon, and the demanding workload appeared to catch up with them in a picturesque stadium of which Mills will have particularly happy memories.

He hit all the goals in a 3-0 victory over Asarum, although the fact that the first of them didn’t come until the 65th minute underlined the point that the division four leaders were well organised enough to make it a game as well as to hit back with a fine consolation effort of their own. Wolves looked leg-weary, so much so that they made no fuss whatsoever when Mills completed his second hat-trick of the trip – a reaction that forced their manager to yell from the dug-out: “For God’s sake, will somebody go over and congratulate him!” 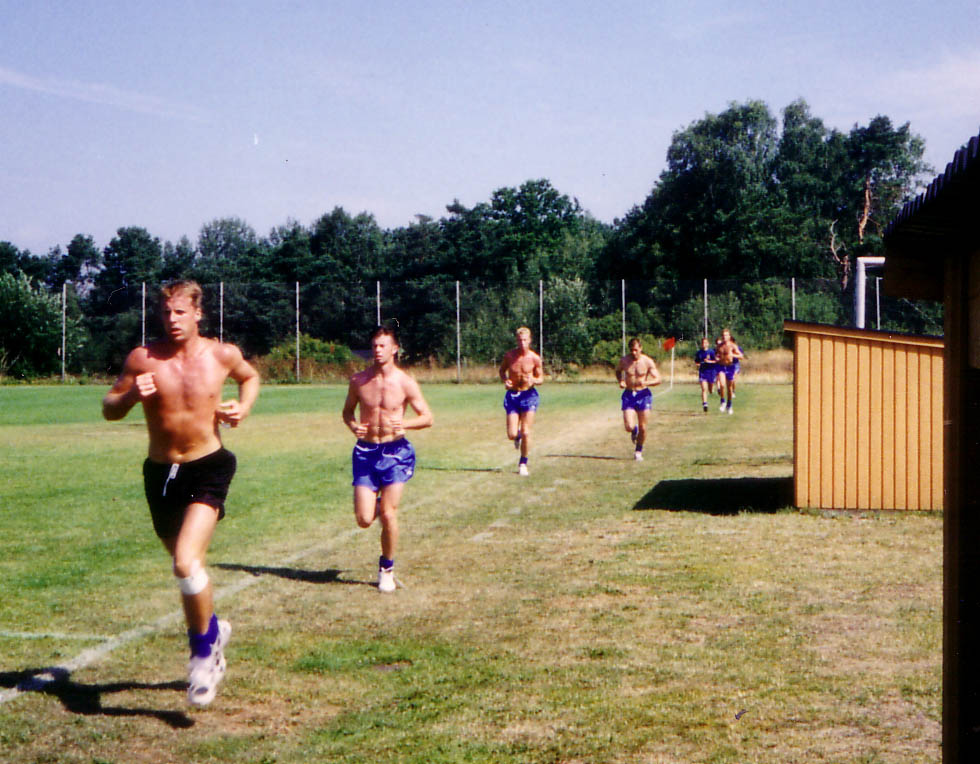 Mike Stowell leads the way, followed by Steve Froggatt, on another punishing day for Wolves' players at their Swedish training base.

When Wolves packed their bags for home the next morning, they had the record of five wins out of five and a goal return of 22 against three. There were also blisters aplenty from the hard pitches but it was considered to have been a successful week and a half.