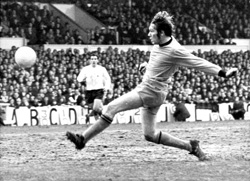 Waggy on the rampage at White Hart Lane.

Dave Wagstaffe was among the VIPs at not one but two functions surrounding Manchester City’s hosting of this summer’s UEFA Cup final.

In the weeks before Zenit St Petersburg beat Rangers at the City of Manchester Stadium, Waggy, who was born half a mile from Eastlands, was joined by the likes of Denis Law, Peter Reid, Joe Corrigan and Phil Neal at a Town Hall buffet, at which the chief guest of honour was UEFA chairman Michel Platini.

The function, staged to mark the official hand-over of the UEFA Cup trophy to Manchester’s Lord Mayor, was also attended by ex-City defenders Tommy Booth and Dave Watson, the former Maine Road father-and-son pairing of Ken and Peter Barnes, and Ipswich legend John Wark. Sir Alex Ferguson and Sven-Goran Eriksson were invited but unable to attend.

Waggy then returned in late May to watch the final itself, in which Zenit, featuring one of the stars of Euro 2008, Andrei Arshavin, beat Rangers 2-0.“I was asked along as a former City player and, I understand, because I scored for Wolves at Tottenham in the final in 1972,” he told www.wolvesheroes.com

“It was lovely to be remembered and to be given the chance to be there. Denis Law and Michel Platini were among those who made short speeches at the first function and I had my picture taken with the trophy. It didn’t quite make up for missing out with Wolves all those years ago but it was nice to get my hands on the silverware at last!”