Paul Cook proved he had lost none of his love for Wolves when greeted by a familiar sight during his promising spell in charge of Eircom League club Sligo Rovers.

The popular former Molineux midfielder looked up from pitch-side before a recent game to catch a glimpse of a gold and black mid-1990s shirt being worn on the front row of the stand by Wolves fanatic Gwilym Machin.

“The next thing I know, Cooky is having a chat with us about the old days and asking what’s happening at Wolves these days,” said Gwilym, who had flown across the Irish Sea with his wife Morag for a weekend break from their home in Glasgow.

“Although we both used to live in Telford, I don’t suppose I had seen him since he left us in 1994 but he remembered my name and even told me off for not letting him know I was going over.

“He has always been brilliant at mixing with the supporters – that’s one of the reasons he was a favourite for a lot of Wolves fans. 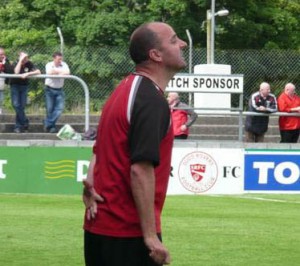 Showing from the technical area that his communication skills aren't limited just to the fans!

“He once came out of the players’ entrance before a game at Brighton’s old ground and asked if we had tickets. When we said ‘no,’ he disappeared back inside and returned with a few which he was happy to hand out.

“Because he seemed to like getting out of the dressing room for a few minutes before matches, we didn’t often pay for tickets at away games for a year or two!”

Cook, who played well over 200 Wolves games after being bought for £250,000 from Norwich by Graham Turner in the autumn of 1989, is in his second season with Sligo, who are based towards the Republic of Ireland’s north-west corner.

His side finished a respectable sixth in 2007 and are similarly placed this time round.