Wolves And The Monkees Part Two 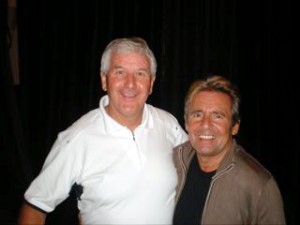 More than 40 years on from the well-publicised meeting of Wolverhampton Wanderers and The Monkees in Los Angeles, a reunion has taken place between members of two of the entertainment business’s world-famous outfits.

In 1967, it was Dave Wagstaffe’s boyhood friendship with Davy Jones on the back streets of Manchester that brought about a coming together in Hollywood when Wolves were on their way to winning the North American Soccer League.

The singer was in the crowd and saw Ronnie Allen’s jet-lagged players introduced on to the pitch during a Manchester United v Chelsea friendly at the Coliseum Stadium as they were preparing to carry the Los Angeles city name during the seven-week-long tournament.

Now, another member of a squad who were subsequently invited to meet the band members and watch them in the recording studio has looked up their lead singer and met him on the other side of the Atlantic.

Les Wilson still lives in Vancouver and took it upon himself to make contact with Davy when hearing he was taking to the stage in his area.

“He was playing an hour’s drive from our home – in a city called Bellingham in Washington State,” the player told www.wolvesheroes.com

“We arranged to meet at the gig and it was tremendous to reconnect after all these years. He is as vibrant and enthusiastic as ever, in good health and enjoying life.

“He had taken the trouble to make himself known to us through Waggy when we played that long series of matches over there, so it was good to return the favour and go and watch him. 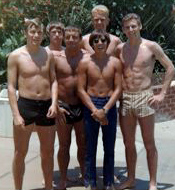 Lapping it up in LA in 1967 are (from left) Les Wilson, Dave Wagstaffe, Ernie Hunt, Graham Hawkins, Davy Jones (front) and Bobby Thomson.

“I remember getting him tickets for Wolves games against the Manchester clubs in the late 1960s and, to this day, he remembers how the players looked after him.

“It was the least we could do for the way he had looked after us in America.

“I’m also originally from Manchester and proud of what he has gone on to do in his career. The Monkees had a half-hour TV show back in the 1960s and were seen as one of the challengers to The Beatles – they were that big.

“I then remember in the late 1970s or early 1980s when I was with Vancouver Whitecaps that I had a call from Slade – I suppose because of their Wolverhampton connections – to say they were playing in the city at a club called The Commodore that my friend ran.

“Unfortunately, I couldn’t attend because I was flying out early next morning to scout a match in the NASL but, like Davy, I’m sure they have done very well down the years from their royalties!”