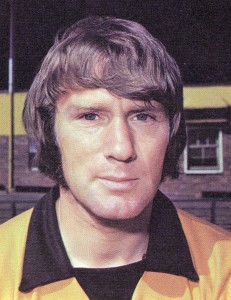 Two copies of Dave Wagstaffe’s terrific life story, Waggy’s Tales, are up for grabs thanks to this exciting link-up between www.wolvesheroes.com and the publication’s publishers, Breedon Books.

All you have to do to go into the hat is to correctly answer these four questions, all of which relate to facts or statistics contained on this website:

1. Which two former Wolverhampton Wanderers goalkeepers have been featured so far in the Picture Of The Week area of www.wolvesheroes.com?

2. Who is sixth in the list of all-time Wolves appearance-makers, having played 508 League and cup games for the club?

3. How many storeys are there in the major building project Paul Blades is overseeing in Birmingham in his health and safety role?

4. What is the retail price of Waggy’s Tales, as referred to in a caption beneath the book’s cover on this website?

E-mail your answers to info@wolvesheroes.com and make sure you include your name, postal address and daytime telephone number.

The deadline for entries is 5pm on Saturday, August 30. We will announce the names of the two winners on this site on Monday, September 1, and also notify them by post.

The judges’ decision is final and no other correspondence can be entered into.

Breedon Books are also the publishers of the Wolves Complete Record hard-back that is due out later this month.