Bobby In The Runs 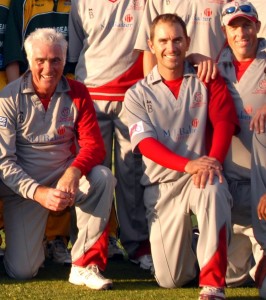 As a striker who scored a dozen or more goals for no fewer than nine clubs – including two spells at Wolves – Bobby Gould’s football feats are well known.

What aren’t as well publicised are his strictly amateur cricketing accomplishments, which show few signs of slowing down, even at the age of 62.

Gould is now resident in Bristol and plays for Portishead Second X1, batting anywhere ‘from one to six’ and occasionally meeting the stars of the summer sport during celebrity appearances.

“Our eldest son, Richard, is the chief executive of Somerset and meets Rachael Heyhoe a lot and helped see to it that I played in one or two of Marcus Trescothick’s benefit games,” he said.

“I batted with Marcus in one and we put on 100, although I try not to tell people that his contribution to the effort was 84!

“My highest score this season is 41 and I must be the oldest player in our side by about 30 years. But age doesn’t worry me. I’m growing old gracefully!”

Gould’s cricket connections don’t end there. As his former goalkeeper son Jonathan now lives in New Zealand (and has been at the Olympics as coach to the national under-23 team), he spent part of last winter Down Under. 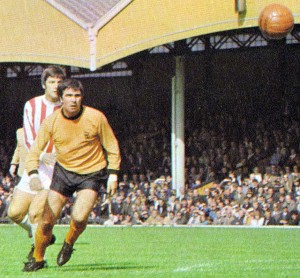 Keeping his eyes on the ball with Stoke's Alan Bloor as a shadow in front of the famous Molineux Street Stand.

“We were in Napier when the England cricket team were there and I got quite friendly with Paul Collingwood,” he added. “I love the sport and am a big fan of both Somerset and England.”

Gould joined Wolves in both 1970 and 1975, totalling 93 appearances and scoring 39 times at a very healthy rate of one goal in about every two and a half matches.