The Mother Of All Tours

Can there ever have been a football trip like it? America, Canada, New Zealand and Australia all in one go. Twelve matches in three countries in 29 days.

Players wouldn’t stand for it today, not to mention managers, sports scientists, nutrionists and fitness coaches. And the carbon footprint would be extra extra large.

Bill McGarry didn’t seem to tolerate it either. He oversaw the American sector of the marathon expedition Wolverhampton Wanderers undertook at the end of their thrilling 1971-72 season and then handed the reins to Sammy Chung while he himself headed off on holiday and his squad headed Down Under.

This article confines itself to the Australian leg of a journey that was literally round the world and is based on the memories of defenders Frank Munro and Gerry Taylor, both of whom were fortunate enough to regard themseles as enthusiastic travellers.

Gerry Taylor in his Wolves days.

“It was a great way to see different countries without paying for it,” Taylor says. “I’ve been to America a few times but hadn’t been to Australia before and haven’t been since.

“As I remember, the visit Down Under came about at short notice because Manchester United dropped out of a trip, so the facilities were absolutely fabulous and we were brilliantly looked after.

“But it was very hectic. We would fly into a place, rest for a day, play and fly out again. Although I remember seeing Sydney Harbour because our hotel was in that area, there was very little time for sightseeing.”

Taylor nearly missed going to Australasia as he had picked up a hamstring strain in America. It was only because Toby Andersen – ‘an excellent physio’ in the full-back’s words – was with the party and there was no medical back-up at Molineux that he stayed with the group and received treatment en route as required.

The opening game in Oz was a 1-0 defeat against a National X1 in Melbourne – a match Munro remembers for two reasons.

“My clearest memory is of Waggy stretching his hand through the railings outside Olympic Park and handing a ticket to a school friend he hadn’t seen since the late 1950s,” he said. “I became good mates with this bloke and he bought my house off me after I had lived in Melbourne many years later. 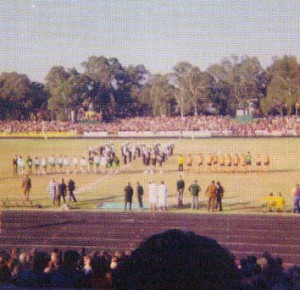 A fan's snap of Wolves and their hosts in Adelaide.

“On the pitch, our opponents were very committed, as Aussies always are, and Hugh Curran received a lot of stick from his markers.”

How wound up the Scottish striker was became clear when, against the same side in Sydney the very next day, he was sent off three minutes from time for turning round and whacking a defender who had hacked him down.

Curran had previously made a mark of a different kind in the game by netting in a 2-2 draw in which Munro also scored – and the last thing the players needed in their fractious, bruised and jet-lagged state was to be greeted by warmer, more humid weather in sub-tropical Brisbane.

It was in the match against a Queensland X1 that one of the youngsters in Wolves’ squad, forward Peter Eastoe, distinguished himself with a fine hat-trick. Derek Dougan, Kenny Hibbitt and Jim McCalliog also scored in a 6-1 victory that was followed by the rare luxury of three days’ breathing space before the next fixture – an exciting 3-2 success over South Australia in which the goals were netted by Danny Hegan, Alan Sunderland and Hibbitt.

“We actually had a bit of down-time in Adelaide,” Taylor recalls. “I got to know a Wolves fan who had emigrated there and who invited myself and one of the other lads round to his house for tea.

“It was a bungalow out in the suburbs and they were telling us that a few days earlier they’d had a snake in the kitchen which they’d had to beat out with a stick!

“I would guess we had 17 or 18 players in the squad and Peter Eastoe did particularly well in that game in Brisbane, although he was regarded as one of the reserves.”

Taylor and McCalliog might conceivably have had their Australian adventure lengthened. Both were approached during the trip by a Tasmanian FA official from Hobart who was keen to sign them for a season. But their Wolves’ commitments ruled out any chance of a deal being struck. 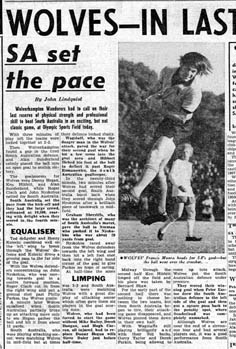 Wolves’ players were by now thinking more than ever of home but had one final game to play only 24 hours after match no 4. This was in Perth against Western Australia – one attended by Andy Collins, a young Wulfrunian who had emigrated with his parents to what is often described as the world’s remotest city.

Andy, who subsequently named several of the rooms in his house after Molineux greats, donated a cine film of Wolves’ 3-0 victory against WA to the club archives. And the slightly fuzzy footage shows goals by McCalliog, Dave Wagstaffe and Eastoe in front of a 15,000-plus crowd.

“The game in Perth was quite comfortable but the one in Sydney was hard,” Munro says. “We were still tired following the game 24 hours earlier and after a long flight from New Zealand but we were fired up because of the treatment Hughie received.

“The opposition might only have been about Third Division standard but they were very fit. Australians put a lot of time and energy into their sport, although football comes in behind Aussie Rules and cricket, and swimming is also very big over there.

“Most of us enjoyed the travelling even if hanging round at airports became boring. We were able to sample the Aussie beer and Sydney was a great place and Perth was incredibly clean. I loved the country so much I went back there to live for quite a long while.” 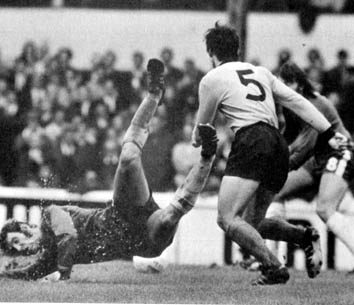 Taylor played 192 League and cup games for the club, including two-thirds of the ties in the 1971-72 UEFA Cup run in the months before this huge tour.

“It was an excellent trip but very tiring and it took us a while to get over it,” he added. “Australia was super and I’d like to return but the flight is a daunting proposition.”

You would have thought Wolves’ players had done enough travelling to last them a year. Not so, according to manager McGarry. Within a month, they were packing their bags again for a pre-season tour of Sweden!