Robins Next For Masters Of Midlands

Wolves will face Bristol City in their opening game of the Masters Cup tournament’s grand final a week on Sunday.

The prize for the side who won the Midlands Masters in style is a crack at the team who emerged victorious from the Western group.

And Wolves will be on ‘home’ ground as the big night is being staged at the NEC, just down the road from where they triumphed at Birmingham’s NIA last month.

While their local scalps were Walsall, Albion and Villa, Bristol took care of Swansea (3-0) and neighbours Rovers (4-0) before winning 3-2 in the final against a Cardiff side with whom they had drawn 2-2 in the group stage.

The Robins line-up includes Marcus Stewart, Clayton Blackmore, Rob Newman and Martin Kuhl and will be on parade against Wolves on September 7 in the final match of the opening phase.

The winners could then be facing the team who have dominated the event for the last three years, Leicester. The East Midlanders beat Wolves on penalties in the deciding fixture on finals night last year and were also national champions in 2005. 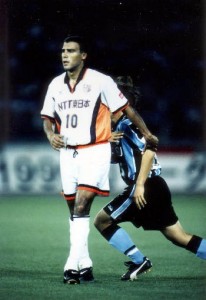 Mark Burke in action during his time in Japan. Now he has a Wolves challenge close to home.

To earn the right to face Wolves or Bristol, they need to beat Middlesbrough in their first test.

The other teams taking part in the Sky-televised showpiece, which is sponsord by Screwfix, are Tranmere, Rangers, West Ham and Manchester City.

Mike Stowell and Mark Atkins have stood down from the squad since last year, Jones and Goodman taking their places.