In For A Treat 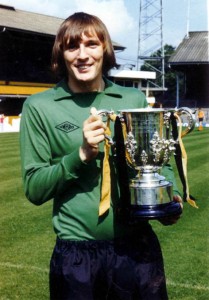 Gary Pierce with the League Cup in 1974.

Barry Norwood of Dudley and Sheila Harvey of Worcester are the lucky winners of the Waggy’s Tales competition we posted on Thursday, August 14.

Several entrants seemed to be thrown by question one and incorrectly named Malcom Finlayson and Fred Davies as the two Wanderers goalkeepers who had been featured at that time in the Picture Of The Week section of www.wolvesheroes.com

But the successful duo rightly plumped for two later Molineux keepers, Phil Parkes and Gary Pierce, as the men in question.

Thanks to publishers Breedon Books, Barry and Sheila each receive a copy of the excellent book detailing Dave Wagstaffe’s four decades at Molineux and will be hearing from us very soon.

The other answers we were looking for are as follows:

John McAlle stands sixth in Wolves’ all-time appearance-makers list in League and cup matches, as detailed in the Legends section of this website; there are 23 storeys in the building project adjoining Birmingham’s Mailbox that former Wolves defender Paul Blades is overseeing in his health and safety role; and Waggy’s Tales costs £12.99, as referred to in the caption below the picture of the front cover in our Books area. 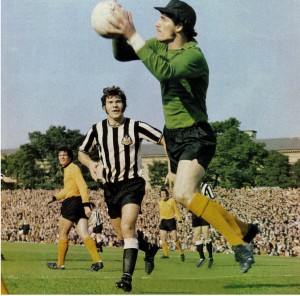 Not to be caught out - Phil Parkes.

The title will be on sale through Wolves’ usual retail outlets, from Breedon Books in Derby or from Thomas Publications.