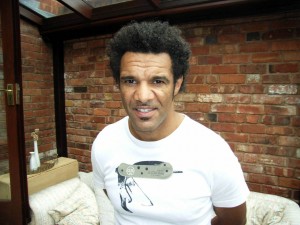 Aiming for the Masters.

Don Goodman is hoping to miss out on a Sky summariser stint tomorrow – in favour of Wolves going all the way in the Screwfix Masters Cup’s grand finals night.

The striker is on stand-by to co-commentate on some of the games in the live TV event but only if the side carrying Molineux hopes are eliminated early.

Having won the Midlands Masters at the NIA in July, they face Western winners Bristol City in their opening game of the Sunday spectacular at the NEC.

In a straight knock-out format, the victors from that clash will then face either Middlesbrough or 2005 and 2007 champions Leicester in the semi-final.

“Teams like Leicester and ourselves have kept the nucleus of the side together and had success in this tournament,” Goodman said.

“The physical nature of the games is a shock the first time you’re involved. We may play a few charity games but, for most of us now, this is the only competitive football we get.

“I took up tennis because I love the buzz of competing. For me, going on court is all about trying to close the gap on players who are better than me.

“As for the Masters, we feel we have as good a chance as anyone, although we certainly don’t train for it – and understand that Leicester do!

“There are a few lads in our side who I don’t see from one tournament to the next and others like Andy Thompson and David Kelly who I have a regular game of golf with. But all footballers will tell you they miss the dressing room when they stop playing, so this is a way of getting some of that banter back.”

Goodman was a hit on and off the pitch at the NIA recently, mingling with spectators when Wolves weren’t playing to sign autographs and pose for photos with fans.

He was planning for more regular Sky duty today with a trip to see Bristol Rovers in their League One game away to Darren Ferguson’s Peterborough.

The Masters action gets under-way at 6.30pm, with the finish scheduled for 9.30pm. Doors open at 5pm.