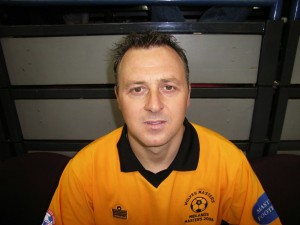 Darren Roberts - his brace sealed it.

Wolves are tonight champagne-soaked and celebrating after winning the Screwfix Masters Cup for the first time.

Following last year’s defeat on penalties against Leicester in the final, a largely unchanged side went one better at the NEC tonight in front of their gold and black hordes.

A Manchester City side containing Keith Curle were beaten 5-3 in a thrilling final, in which Wolves led 3-1 at half-time through goals by Mark Burke (2) and Phil Robinson before being pegged back to 3-3.

Then two excellent late goals by Darren Roberts, the second with the last kick of the night, saw them home.

“We didn’t play particularly well,” admitted the early 1990s Molineux striker. “We can do much better than that but it’s brilliant to win it after what happened to the lads 12 months ago and in one of the other finals.”

All of Wolves’ three games on finals night were goal-laden, with Bristol City edged out 4-3 by them in the quarter-final, Roberts, David Kelly, Robinson and skipper Mick Gooding scoring the goals.

And Kelly was the undisputed hero of the semi-final when his first-half hat-trick saw off Leicester’s conquerors Middlesbrough 3-2, all of the goals coming before the turnaround.

Goodman combined playing with a spot of summarising for Sky TV and said afterwards: “We have won it without setting the tournament alight – and we’re delighted.”

Tranmere were the other beaten semi-finalists, with West Ham and Rangers joining Leicester and Bristol as losers at the last-eight stage.