Jon Opts For A Change Of System! 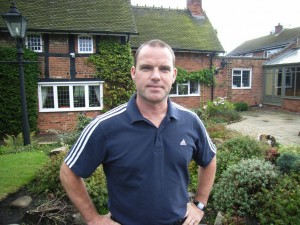 At home with Jon Purdie.

Jon Purdie admits he’s full of regrets that his football career didn’t prove more fulfilling – but reveals that he’s earning ten times more now than he ever did from the game.

With a wife and two sons, a 17th century house and a flourishing business, the 41-year-old gives every impression now of a man who is being dealt a good hand in life.

But it still rankles that he didn’t make more with the ability that prompted his mid-1980s Wolves manager Sammy Chapman to once place a £1m price tag on him.

“I became a footballer because I wanted to be rich and famous but, at 23, I realised I wasn’t going to make it,” he said in an interview at his home in Pattingham . “I fell out of love with it really.

“My first 18 months at Wolves were great. I was playing regularly and it was exciting. But Graham Turner came in and I clearly didn’t fit into his way of playing.

“I went off to Cambridge on loan and Shrewsbury but I never wanted the insecurity that comes with being a journeyman professional, so I went part-time with a number of non-League clubs.

“It proved a very good decision because I quickly tripled my wages by having a job outside the game as well.”

Purdie, a Northamptonshire-born former England schoolboy international who had Tony Adams, Niall Quinn and David Rocastle as contemporaries in his formative years at Arsenal, was one of the rays of hope during Wolves’ bleak slide out of the Third Division in 1985-86.

He played 46 games all told that season and 47 the one after, although he increasingly became overshadowed by Robbie Dennison.

He was released just after the 1988 Sherpa Van Trophy final, the career highlight other than his 103 Wolves appearances and 13 goals undoubtedly being the spectacular FA Cup winner he scored at Birmingham during Kidderminster Harriers’ journey to the fifth round in 1993-94. 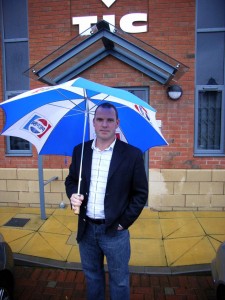 Outside the TIC head office at Pendeford.

By then, the skilful forward was forging a second career in telecoms and is now a director of a company called The Independent Choice, who have offices in Pendeford and Birmingham and who sell, install and maintain phone systems in the business sector.

Patshull Park, Weston Park and the Black Country Museum are among the customers of a business he runs with his wife and father-in-law – and a workforce of around 15.

“I still work on the sales side and you’d have to say we are competitors to British Telecom,” he added. “It’s proving a rewarding way of life but I’m still involved in football through the Wolves All Stars, through my coaching badges and through Finchfield FC, the club our lads have played for and who TIC sponsor.”