Wolves legend John Richards makes his debut on this website tomorrow when he pens a personal piece about one of his former Molineux team-mates.

Richards, who used to write a weekly Sporting Star column during his playing career, will be providing a concise insight into one of the players who was very much part of the first-team scene at the time that he himself made his first appearance in Bill McGarry’s attack away to Albion in February, 1970. 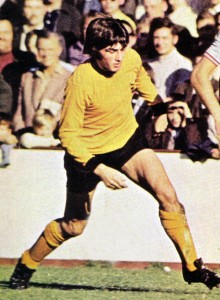 There will be other occasional articles in the coming months from JR, who has already had a hands-on role in the emergence of www.wolvesheroes.com

Apart from figuring high in our Legends section, he works full-time these days for Pitchcare, the Wolverhampton-based company who are responsible for the design and upkeep of this site.

“Plenty of the former players are enjoying logging on to www.wolvesheroes.com and seeing what their old mates might be up to now,” said the striker, who scored 194 goals for the club – a Molineux record until Steve Bull came long.

“As soon as I heard about the site, I thought it was a terrific idea.”