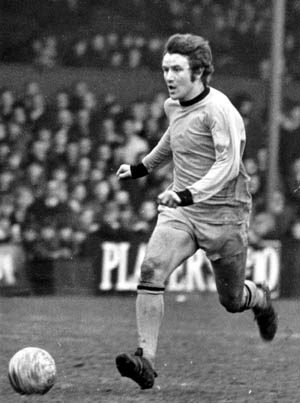 John Richards kicks off his series of occasional articles on this site with an insight into the character of Les Wilson, a man who has achieved magnificent deeds in the game since returning to his home country.

An extended feature about Canadian-based Wilson is due to appear on these pages over the next day or two but here, by way of a taster, is what JR has to say about him:

“Les was a fit lad – in the sporting sense of the word, of course – and my earliest memories are of him leading the field in the annual pre-season cross-country slog over Cannock Chase.

“Accompanied by Derek Parkin and John McAlle, he made it look like a stroll in the park while the rest of us were gasping way behind.

He was Mr Utility and could play in virtually any outfield position. I suppose his preference was right-back but he was comfortable in midfield and on the right wing, and he bagged the odd goal or two.

In those days of only one substitute, he was an invaluable asset because he could slot into any position without the team being weakened.

Les and I played just a handful of games together in the first team but many, many more in Wolves Reserves. He was the ideal playing colleague; hard-working, quick with limitless stamina, and always offering encouragement.

He was quite happy talking to younger players and always prepared to give advice. In fact, we considered him to be a bit of a novelty. He was very articulate, friendly and interesting, with this strange lilt to his voice. Intriguingly, he was from Canada, a faraway place to most of us, who considered Ireland and Scotland to be distant lands!

Wolves fans of the 1960s and early 1970s will remember Les and he undoubtedly made a lasting impression on all his work and playing colleagues.

He left Molineux in the early 1970s when his playing opportunities were becoming more and more limited.

He clearly had the intelligence to plan for a working life beyond his playing days, though, and it comes as no surprise that he has had such an outstanding post-playing career back in his native land.”