The Football Life And Times Of Les Wilson 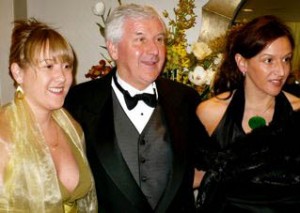 Les Wilson, with daughters Natasha and Tanya, earlier this year.

For what he did in taking a small football country to the World Cup finals, there’s a bit of Jack Charlton or even Mick McCarthy.

For the way he later used his coaching talents when adopting a measured and highly respected overview, he is seen as a sort of Stateside Trevor Brooking.

And when offered the job as CONCACAF deputy secretary in 1999, he did what Roy Keane would no doubt love to do again and told the federation’s outspoken president Jack Warner to sling his hook.

Les Wilson’s first-team career at Wolverhampton Wanderers may have been relatively brief but his 40-year stay in the game has been one of enormous achievement.

Here is a man whose belief in fair play and honesty earned him the nickname ‘The Reverend’ among such prominent 1960s Molineux characters as Derek Dougan, Mike Bailey and Dave Wagstaffe.

And, by playing at Maradona’s World Cup in Mexico almost a quarter of a century ago, Wilson’s Canada side were perhaps benefitting from a more acceptable Hand of God as they appeared in the finals for the first time.

It is a remarkable story on both sides of the Atlantic and one that is currently in the early stages of being committed to print in an autobiography.

Born in Manchester but raised from the age of seven in Vancouver, Wilson enjoyed such success in a variety of roles that he was inducted into Canada’s football Hall of Fame earlier this year.

The reasons are clear. He also took his country to the 1984 Olympics, to the gold medal at the 1989 Francophone Games in Morocco and to an impressive triumph at the 2000 CONCACAF Gold Cup in the USA. In addition, he has managed the men’s national under-17s, the women’s side to World Cups in China in 1988 and the USA in 1999 and the men’s national under-20s to their World Cup in Malaysia in 1997. 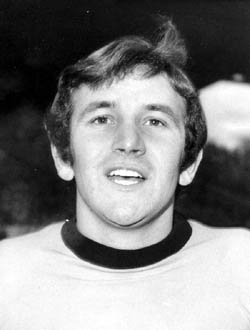 The young hopeful at Molineux.

It all started, though, in Wolverhampton at the club who remain so dear to his heart that no player has embraced the www.wolvesheroes.com concept as eagerly as he has.

“I believe I was the first North American-developed player to play over 100 games in the English top division and possibly the first to play 170 matches on your side of the Atlantic,” Wilson told us from his home 4,800 miles away. “I probably played around 120 games for Wolves in all.

“Going over there, you went through the school of hard knocks. I was very fortunate that I was playing against some of the best players in the world at that time. I have very fond memories of those days at Wolves, both of the games I played in and the colleagues I played with.

“I believe the experience of being around such good, solid players taught me how to win games at elite and international level and I am obviously very thankful to have had a career in football spanning four decades.”

Wilson was first spotted by Wolves on the Canadian leg of a 1963 tour that they spent largely in the United States. As a 17-year-old, he had become the youngest boy ever selected for the British Columbia All Stars team when named for games against Liverpool and Red Star Belgrade, both champions or champions-elect in their domestic leagues.

He was subsequently invited to spend time at Molineux and signed a professional contract in 1964, making his debut in the Second Division game against Middlesbrough at Ayresome Park in December, 1965.

Homesickness was a problem and Jack Howley, Wolves’ long-serving secretary and general manager, was sufficiently concerned to write to the youngster’s parents, calling him ‘a grand boy of such splendid character’ and promising them he was in safe hands so far from home.

Whatever we may think of the likelihood of high-ranking officials of Manchester United or Chelsea finding the time to send such assurances these days, Wilson clearly made the right impression in that era of more frequent social niceties.

Along with Alan Sunderland, he can lay claim to be one of the most versatile performers in Molineux history, occupying eight different jerseys in an age when shirt numbers actually reflected players’ positions. He made another slice of history when donning a ninth number (12) and becoming the first Wolves substitute ever to score in a League game – a 4-2 defeat at Everton early in 1967-68. 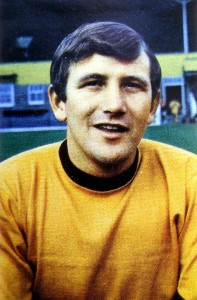 His best season was 1968-69, in which he made 40 appearances, but nothing made him prouder than flying back across the big pond in the summer of 1967 and helping win the United States Soccer Tournament as a member of Ronnie Allen’s Wanderers squad.

Although a 25cents Washington Whips (Aberdeen) v Los Angeles Wolves official programme sits in his collection of keepsakes, it was on that long, successful trip that his ecclesiastical nickname came under greatest threat.

“The tag stuck for most of my career, not only in England, but also in North America and on the FIFA circuit,” he added. “I have strong principles, always have had.

“But, in 1967, my parents and brother Garry drove for 26 hours from Vancouver to San Francisco to see me play for Wolves against ADO from Holland. We had just drawn 1-1 with Shamrock Rovers in Los Angeles and I thought I had played well. Maybe Ronnie Allen did not think the same way and I didn’t start in the next match.

“We lost 1-0 after going seven or eight matches unbeaten and I was extremely disappointed for my parents and Garry that I had only played briefly as sub. I had a go at Ronnie after the game. I was only 20, a little naive and innocent compared with some of my team-mates but I was never a ‘yes man’ to anybody. My parents then drove to LA in the hope of seeing me play in the return against ADO at The Coliseum. At least I played in this one, so they did see me in action before leaving on their return journey to Vancouver, 30-odd hours from LA.

“When Ronnie left Wolves, I had a good run in the team for over two years. But I have to say that when I met him at a game at West Bromwich one evening quite a bit later, he was very complimentary about my passion for the game and my determination.”

Wilson moved to Bristol City in 1972 and played 49 games there before switching to Norwich in 1973 and back to Vancouver the following year. Injury cut short his playing days in 1978 in his early 30s but he was about to embark on the second half of his football career.

Moving into coaching, he helped Vancouver Whitecaps to their North American League ‘Soccer Bowl’ championship triumph in 1979 and stayed with them as staff coach, director of player development and club administrator until 1983. He was then made national manager and administrator – a position he held for no fewer than 18 years as he took Canada to heights they had not previously scaled.

Back in Canada in later years.

The fond memories he had of Los Angeles from playing there with Wolves were underpinned when his side reached the quarter-finals of the 1984 Olympics in the same city and then made it to the World Cup finals in 1986. Much later, the country improbably won the CONCACAF Gold Cup but it was the inaugural Francophone Games in 1989 that provided one of his most inspiring memories.

“That was one of the most gratifying days in my career,” said Wilson of a 4-1 Canadian win against hosts Morocco. “To go in front of 85,000 rabid fans and win the way we did was very special. It was against all the odds; a magnificent win.”

The burden of international management didn’t stop him remaining busy elsewhere. In 1985, he was one of three founding directors of the Vancouver 86ers, the club who won four Canadian Soccer League championships in the late 1980s and early 1990s.

And he remained happier in dug-outs than in suits. A reluctance to uproot his family from Canada to New York prompted him to say no to an approach to work alongside Warner, a man he believes acted disgracefully by openly stating in much more recent times that he didn’t think England should host a World Cup finals. 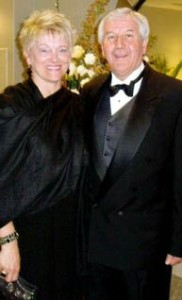 Les Wilson and wife Lois at the Hall of Fame induction ceremony.

Wilson was nevertheless appointed in 1992 to the CONCACAF Commission Panel in New York, then, in June, 2000, as executive director of the British Columbia Soccer Association.

Around the time of his Hall of Fame induction in Woodbridge, Ontario, last spring, he was said to have made an ‘overwhelmingly positive impact on soccer in Canada, North America and CONCACAF’ and he still does some football consultancy work while in semi-retirement.

“I am naturally very proud of what I have been able to achieve in football,” said Wilson, now 61. “But, more than that, I feel privileged that it has happened to me.”