A Fond Send-Off For Bill 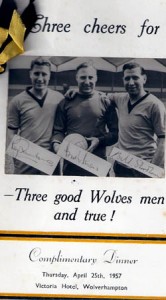 Around 200 mourners attended St Bartholomew’s Church in Penn, including not only one-time team-mates of the powerful defender but others who had either been coached by him in later years or known to him through the Wolves Former Players Association.

Unfortunately, Bert Williams, born 200 yards from Shorthouse in Bradley, Bilston, was an absentee following a fall at Molineux during Tuesday’s victory over Crystal Palace, although the congregation were reassured that he was ‘shaken but doing really well.’

The address that the club’s best and most famous goalkeeper of all time was due to give in church was read instead by Alf Crook, who relayed a moving tribute: “This is one of the saddest days of my life, saying goodbye to a friend who was a perfect example of how a sportsman should conduct himself on and off the pitch.

“He played with total commitment for his beloved Wolves and was a genuinely nice person. I and many thousands of others are deeply saddened by his death but the happy memories will stay with me for the rest of my days.”

Ted Farmer made his debut in Wolves’ attack four years to the week after Shorthouse had played the last of his 376 competitive games for the club and later offered a forward’s slant on a player considered unlucky to have missed out on international honours.

“Forget Billy Bremner, Chopper Harris and Dave Mackay, Bill was the hardest player I ever knew,” he said. “But he was also very fair and an excellent defender.

“It’s sad that he was the last link with the backroom team in the famous Stan Cullis era. We’ve now lost Joe Gardiner, Jack Dowen, Jack Davies, Bill Shorthouse and several others who weren’t as well known.”

Phil Parkes, whose long career in Wolves’ goal started in 1966-67, said: “Bill was one of the reasons I signed for the club. I used to jump on a bus and come to training on Tuesday and Thursday nights and it was normal to see Bill still here at 10pm, passing on all the advice and help he could.”

The cortege drove past Molineux before the service started at 1.30pm – and guests headed to the stadium’s Hayward Suite afterwards for a buffet.