A Jack Of All Trades

All strikers rely on quality delivery – but Jackie Gallagher is now dedicated to providing one rather than being on the receiving end.

The late 1980s Wolves forward, relishing the chance to catch up with old friends at tomorrow’s Molineux reunion of the club’s 1988 Sherpa Van Trophy heroes, has branched away from the team ethic in his chosen new career.

He operates solo these days, burning up England’s highways and motorways with the motto ‘any time, any place, any day.’

“I’ve had my own business now for well over a year,” said one of Graham Turner’s two used Wembley substitutes 20 year ago. “It’s a same-day courier service and I travel anywhere and everywhere.

“This week, I’ve been down in Kent and also over to the docks in Lowestoft to take some machinery for the off-shore rigs. And I can be carrying anything.

“Electrical goods seem to be a regular load and I was up near the West Brom ground a few weeks ago, so that had me reminiscing about my time at Molineux.”

Gallagher, now 50, played 36 times for Wolves in the shadow of the highly feared Steve Bull-Andy Mutch partnership in 1987-88 and 1988-89 and was about to move from Molineux to Hong Kong on a two-year contract when he discovered his wife was pregnant.

A second stint in the Far East, where he had previously played alongside Bobby Moore, was promptly sacrificed and replaced by a trawl round England’s Eastern flank, with Boston, Kings Lynn and Grantham among the many non-League clubs he served in the 1990s.

But the man who played 100 games for Peterborough before moving to the West Midlands is known better at one club than anywhere else.

Remarkably, dotted among his many moves, he played for Wisbech Town in his teens, 20s, 30s and 40s and, as a celebratory farewell appearance, even went on for the last five minutes of a win at home to Woodbridge Town in May, a month into his 51st year.

“I’ve also had three spells as Wisbech manager and our house backs right on to their ground, so I still nip through the gate and do a few laps of the pitch,” he added. 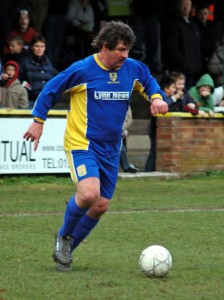 “I know Wolves fans will remember me for my stocky build as well as for scoring a few goals when Bully and Mutchy weren’t playing for some reason. I’ve probably put a couple of stone on since I stopped playing professionally but I still play five-a-side, in a veterans team and also run a youth team that my lad plays for, so I’m still working on my weight.

“I hope to be delivering in the Midlands area tomorrow and I’ve booked Friday off as I don’t plan to be looking after my figure when I meet up again with the lads!”