Still The Best Of Mates, 20 Years On

Was it really two decades ago? Full-time at Wembley and Wolves start to celebrate.

From Wisbech and Essex, Southport, Leicestershire and various points in between, they re-assembled last night to hear themselves hailed as ‘the players who saved the Wolves.’

I’m not sure we tagged them as such 20 years ago when they were winning the Sherpa Van Trophy by two goals and the Fourth Division by a whole lot more. Then again, it was only when Sir Jack Hayward took over that we were sure their rescue act was permanent and the world-famous institution that is Wolverhampton Wanderers was finally off the danger list.

Good pals don’t have to live in each others’ pockets, they just pick up where they left off whenever and wherever they last met – and the fortysomethings who in some cases on Thursday night were crossing paths for the first time in many seasons did just that.

A warm embrace at the old Goldthorn Hotel at teatime from Micky Holmes for Jackie Gallagher, the man who carried him round on the lap of honour at Wembley in May, 1988, to protect his badly injured ankle; some gentle baiting of Mark Venus because of his latter-day Albion connections; and the observation that the likes of Keith Downing, Phil Robinson and even Alistair Robertson had hardly changed and could probably still play. Okay, the skipper has just turned 56 and has the odd grey hair but he looks good on it.

None of them appear totally able to define team spirit, only that Wolves had it famously in those revival years in the lower divisions and that it was something their opponents just couldn’t handle.

Oh and there was Bull and Mutch, of course – managers past and present in the upper echelons of non-League football in recent years but known all over the land as the baggers of the small total of 411 Wolves goals between them.

Bull dropped in late because of his Stafford Rangers duties and received the acclaim and chant you’d expected from a group of 200-plus high-spirited fans in Molineux’s Hayward Suite.

He also had a right ribbing when the microphone was passed along the top table; from Graham Turner, who claimed he had paid more in supporting the striker’s testimonial events over the years than he had splashed out to Albion for his signature; from Mutchy, whose never-ending address to the floor came complete with frequent exaggerated looks for approval from his strike partner; and from Andy Thompson, a master of the impish put-down. 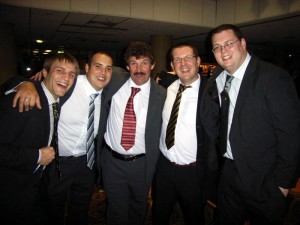 A 2003 TV feature that might have been titled ‘Ups and Downs of the Wolves’ was played on screen amid a collective hush until we reached the famous clip where an ecstatic fan reaches through the open window of the Molineux dressing room on the night of the Sherpa Van Trophy area final conquest of Notts County and bellows his famous ‘Come On Me Babbies’ rally cry. Cue: a big roar. The said fan was in the room, on the London Wolves table, still sporting a huge grin.

Gallagher, a used Wembley sub, might generally have had a bit-part in the renaissance but was a star attraction with mike in hand. He still wears his 1988 Wolves shirt and socks on training runs, God bless him, and is so proud to have been part of it all.

Gary Bellamy, one of the more serious members of the group, drove from Southend to be present, Holmes came in from Leicester and Mutch bragged of playing his many rounds of golf on the renowned Southport stretch of coastline – even if it’s at Hillside rather than Royal Birkdale. 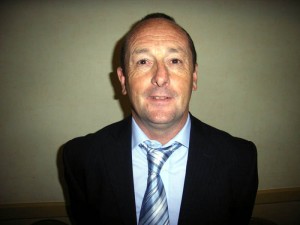 Nigel Vaughan, having cut his coaching teeth at Wolves’ Centre Of Excellence for several years, is now youth coach at Shrewsbury and a much more confident individual than as a player. Downing has it on good authority from Mick McCarthy that he’s a proper manager now he has had the sack for the first time and Robinson, who went in the same Cheltenham cull as Psycho, is helping with his wife’s greetings card business.

Thommo has gone back to school to teach PE, Ally Rob sells swish BMWs in Warley and Robbie Dennison has gone from scoring spectacular Wolves goals to describing them to Beacon Radio listeners.

Also in attendance were Jon Purdie, who modestly reminded the gathering that he was cup-tied for the SVT run after playing in the competition for Cambridge, Turner’s no 2 Barry Powell and of course Veno, the man who, when talking about life at The Hawthorns, was wished a speedy return to football by one quick-thinking guest. 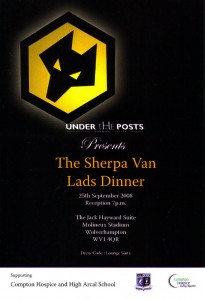 It was a special night, as well as a lucrative one for Compton Hospice and Sedgley’s High Arcal School.

There was sadness, too, with the absence of Mark Kendall, whose laughter and story-telling would have filled the room – and poignancy from Floyd Streete, whose ‘postcard from the Caribbean’ was read out with great humour by Rachael Heyhoe.

It might be ten years before they’re all back in the same room, discussing after-match refuelling, title triumphs, winning at Wembley and ever so slightly bulging waistlines. But, when the day comes round, try to be there.