Another Great Passes Away 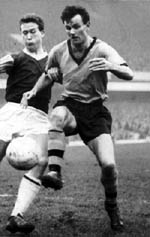 Wolves have learned of the sad passing of another of their 1950s and early 1960s stars, Jimmy Murray.

The 72-year-old died over the weekend following an illness.

He becomes the third former Wanderers player in a few weeks to pass away after Bill Shorthouse and Cameron Buchanan.

An obituary to Murray, who scored a phenomenal 166 goals in only 299 Wolves appearances, will appear on this site in the next few hours.