Cricketers have been touring the Caribbean for decades but there was something unusual about the sweltering visit Wolves made to the region in the final months of Stan Cullis’ reign.

Trips by football clubs to the West Indies were even rarer then than they are now, so players the manager had taken to the United States, Canada and South Africa in previous summers were entering the unknown when they flew out of London some three weeks after the 1963-64 Molineux campaign had ended with successive 4-0 victories over Fulham and Bolton.

What made the adventure even more of a novelty was the fact that it was billed as a joint enterprise between Wolves and Chelsea, who would face each other five times in two weeks of tiring island-hopping. 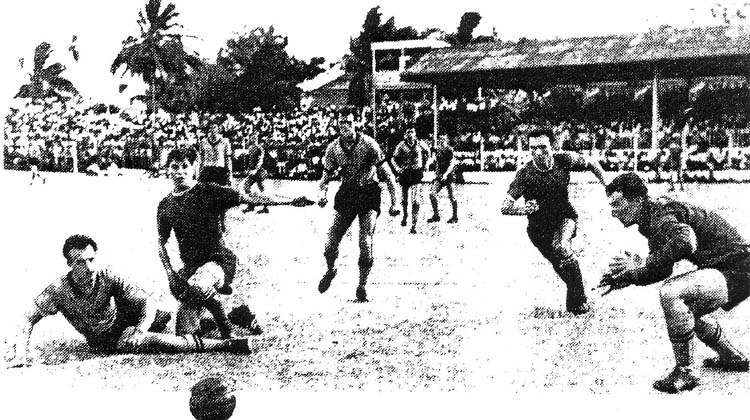 A photo-copy from the Caribbean shows Fred Davies looking on as Gerry Harris goes to ground, watched by Bobby Woodruff.

The sides first met on May 21 in Barbados, where Chelsea had already beaten an island XI 7-0, two of the goals coming from Frank Upton, who later served as a coach at Molineux.

And Wolves had the measure of a team they had beaten home and away in the First Division programme as they ran out 3-1 winners in Bridgetown. Against a team who included manager Tommy Docherty in the first half and his assistant Dave Sexton in the second, Dick Le Flem opened the scoring with a 30-yarder in the first minute and Ray Crawford flicked in Jimmy Melia’s free-kick to restore the lead just before half-time after Barry Bridges’ equaliser.

Barry Stobart replaced Le Flem in the intense heat and crossed for Crawford to seal the win in the 57th minute, although Fred Davies had to make several good saves to keep the lead intact.

On tour, Wolves were without Ron Flowers, who was playing for England, while the country’s under-23s initially deprived Chelsea of Bobby Tambling and their keeper Peter Bonetti, who later served as a coach at Molineux.

Three days later, Wolves were in action in Pointe a Pierre, Port of Spain, and made light work of the Trinidad National X1. Tour skipper Melia and John Kirkham combined to enable Crawford to back-heel Wolves into an early lead and the same player headed the second before completing his hat-trick just past the hour. Stobart rounded off a 4-0 win in a downpour which left the pitch treacherous and the uncovered 12,000 crowd thoroughly soaked.

There was little time for recuperation and, still in Port of Spain, Wolves lined up with Chelsea again the following day. Once more, heavy rain cooled the players in an exciting game settled by a Terry Venables penalty two minutes from time in front of a 25,000 turn-out.

Following a goalless first half, Le Flem equalised Eddie McCreadie’s opener, only for Bridges to restore the Londoners’ lead. Peter Knowles levelled 20 minutes from time before Gerry Harris brought Bridges down in the dying stages of a contest in which a collision with Crawford had left Chelsea keeper John Dunn needing three stitches near his eye.

“It was the most luxurious tour you could imagine but all the matches were nothing short of full-blooded,” Crawford writes in his book, Curse Of The Jungle Boy. And the no 9 would soon learn that he had made an impact of a different kind…..

Jimmy Melia introduces his players to a dignitary in Barbados. Nearest the camera is Johnny Kirkham.

Dunn’s injury had prompted Wolves to hand Jim Barron over as a replacement keeper for Chelsea, who by now had Bonetti suffering from a temperature. And the young Molineux reserve was outstanding in denying Melia, Crawford and Chris Crowe.

The ‘circus’ moved on to Jamaica, where Wolves immediately took revenge on Chelsea in the capital Kingston. More than 13,000 in the National Stadium saw Venables give Docherty’s men an early lead in the evening fixture before Crawford (2) and Le Flem put Wolves in charge. An Upton own goal more than compensated for the one Tambling netted at the other end and the final score was 4-2 on the night Mike Bailey, then a Charlton player, made his England debut in a 10-0 slaughter of the USA in New York.

And the goals flowed once more as Wolves then ran amok by beating a Jamaican X1 8-4. Four of them came in the first 15 minutes and, although tiredness and perhaps complacency allowed the hosts to fight back, the introduction of three substitutes saw the tourists pull away again to win handsomely.

Express & Star readers were being kept well informed by reports from Associated Press and Reuter, although not that well as to know who scored the eight goals in Kingston!

But it was at about this time that Crawford had news of a different kind. he added: “I was drinking a long rum and coke one evening in the bar of the hotel both teams were staying at when Docherty came over for a chat. He didn’t beat about the bush before asking if I would like to join Chelsea, adding that he would throw Barry Bridges in as part-exchange.” 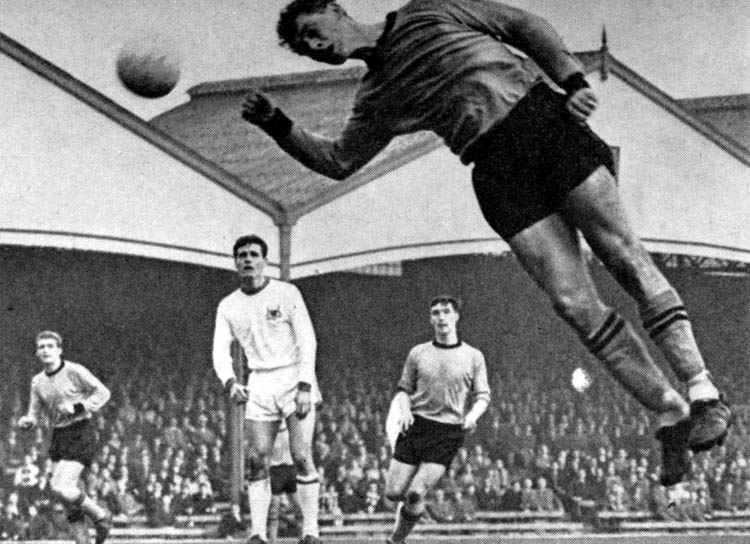 Crawford stressed how flattered he was but said ‘no’ and got back to business as Wolves were next beaten 3-0 by the Londoners in Kingston.

And, on the fourth of the new month, Cullis’ men had more than they bargained in front of a 13,000 crowd in Port Au Prince as a surprisingly skilful Haiti side held them to a 1-1 draw despite Terry Wharton’s 65th minute opener. The goal came after a series of Wolves corners but it was by the same means that Calixte equalised near the end.

Wanderers’ stay in Haiti didn’t prove the happiest as they then lost 2-0 in their farewell game to leave Chelsea slightly ahead in the five-match series between the two. What with a spectacular downpour and the sight of even the groundsmen carrying revolvers, Wolves’ players weren’t sorry to leave the island!

E&S reporter Phil Morgan was on hand to welcome them back on June 9 and wrote that many had ‘gay straw hats’ as souvenirs of their trip. Wharton was still in sunglasses following a whack near the eye that had required a hospital visit in Haiti as a precaution.

The long-serving correspondent described David Woodfield, who had departed only a week after his wedding, as having the best sun tan from what chairman Jim Marshall called ‘a memorable trip.’ Cullis, however, called the football ‘variable’ and Peter Broadbent declined to call it the best of the many Wolves tours he had been on across the world.

As chance would have it, Chelsea visited Molineux on the first day of the new season, won 3-0 and Cullis departed less than a month later. Crawford regretted not going to Chelsea after all…..