Fleet-footed And Cool On Camera 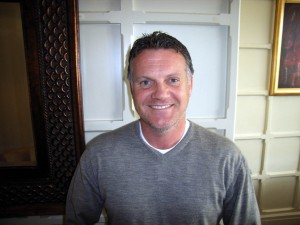 Andy Sinton is now talking a good game on two fronts after showing for two decades that he could play a good one as well.

The midfielder, who spent three years at Wolves towards the end of a career that brought him 12 England caps and almost 620 League appearances for his various clubs, has commitments these days on the touchline and on the television.

As manager, he has taken Ryman League South club Fleet Town as far as they have ever been in the FA Cup by overseeing the 5-0 thrashing of Newport Pagnall that has set up a visit to Totton in the third qualifing round this Saturday.

And his face and voice are becoming increasingly familiar to Central TV viewers in his role as a Monday teatime analyst of weekend matches.

“There’s nothing to replace playing but I have plenty of variation in my working life,” said the 42-year-old.

“I’m down south for three days a week and go back there for matches on a Saturday but we still live in Solihull and my TV work is in Birmingham.

“It’s lovely to be reporting on a region that’s succssful in football at the moment, with Wolves flying high and the likes of Villa, Birmingham and Leicester also well up in their divisions.”

Sinton appeared 82 times for Wolves from 1999 to 2002 and then played for Nigel Clough’s Burton Albion before being appointed in 2005 as manager at Fleet, who are based on the Surrey/Hampshire border.

His young side have lost in the play-offs for the last two years but considerable consolation has come their way in the FA Cup.

“As well as winning six trophies while I’ve been here, we had the best run the club have ever had in the FA Cup when we won through four rounds last season,” he added.

“Eventually, we lost to Havant and Waterlooville, who went on to lose at Liverpool, but we’re going well again this time and have again got through four rounds, so it would be tremendous to go one step further and make another bit of history.

“This job has whetted my appetite for going further in management. Anyone who saw me play probably won’t be surprised to hear that I favour a passing style and I’m putting into operation one or two things I learned from working fairly closely with Nigel Clough.”

Fleet are currently mid-way in a league that’s three rungs below League Two after they finished runners-up to Farnborough last season.