Bazeley Back At Molineux 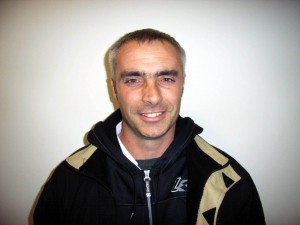 Darren Bazeley - wrapped up during his English visit.

Darren Bazeley has been back in the UK and in the stands at two Wolves games in the last week – while hoping to underpin a cross-the-world link involving Aston Villa.

The former Molineux utility man now lives in New Zealand and works full-time in player development, choosing England’s coldest October snap for decades to return to these shores on business.

He has been chaperoning several Kiwi hopefuls during a fortnight’s trial with Villa’s under-15s and will deliver some of them to Ipswich at the weekend for a second trial, then fly home to Auckland.

“I played for Graham Taylor at Watford before joining Wolves and through him and another coach in New Zealand with Villa connections, Keith Pritchett, we have set this link up,” Bazeley said.

“The lads have been working with several coaches at Villa, including Gordon Cowans, and we’re trying to find them a pathway for them that is not really there in New Zealand. We have only one professional club, Wellington Phoenix, so it would be great to secure Academy contracts for them in England.

“I’m in charge of the under-14 Academy with one of New Zealand’s seven football federations and help run centres of excellence and academies for boys and girls aged from ten to 16.

“This is the first time we’ve brought young lads over here and it’s only a small part of the work we do. But you could say it’s the top end because getting lads into an English club would be a real boost for us all.” 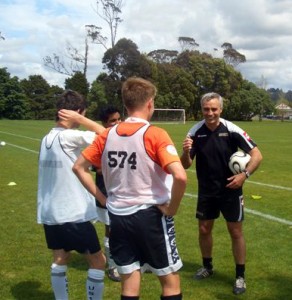 Words of wisdom for young Kiwis.

Bazeley has been Down Under for four years, retiring as a player in May after being a team-mate of Neil Emblen’s at both New Zealand Knights and Waitakare United, the latter of whom go to Tokyo in December for the second successive year for the FIFA Club World Cup.

Just turned 36, he played 80 games for Wolves after being signed by Colin Lee in 1999, then made some 100 appearances for Walsall before embarking on a new way of life with his family.

“It has been lovely being back at Molineux this week and being so well looked after,” he added. “I’ve been lucky that this trip has coincided with two of my old clubs facing each other. I was at Vicarage Road last weekend, where I did the half-time draw on the pitch, and saw Wolves beat Swansea on Tuesday. I was also at Villa v Blackburn last night to see Keith Andrews have a good game and we’re off to watch Ipswich against QPR this Saturday, so it has been a busy time.”