Kenny Hibbitt was focused on county golf finals rather than League Cup finals when he stepped on to the tee at a famous Kent links recently.

The Molineux legend, having featured strongly on Central TV last night in a half-hour tribute to Wolves’ Wembley triumphs of 1974 and 1980, pursued his other great sporting love when he was chosen for a prestigous national event he had never previously played in.

Hibbitt, a scratch player (to the uninitiated, that means he has a handicap of 0), lined up at the top of the order for a Gloucestershire side who finished third in the senior county finals at Prince’s, just along the coastline from the famous Open Championship venue of Royal St George’s.

His team, having overcome Wiltshire, Dorset and Somerset in the regional round at Marlborough, beat Cambridgeshire but were unable to get past red-hot favourites and hosts Kent, who went on to win the three-day tournament.

“We were disappointed not to secure at least second place but Kent were well fancied on their own territory and were too strong,” Kenny said.

“It was terrific playing on a course like that, though, and to get round relatively intact because you could quite easily lose a few balls down there. 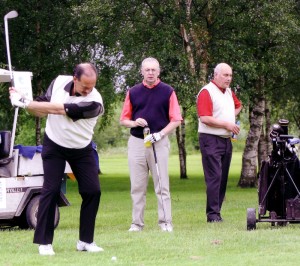 “I played a couple of times for the team last year and have turned out regularly for them this year. We also play in a league against neighbouring counties and finished second in that, which was pleasing.

“I don’t play individual stroke-play events at county level, though. I had enough of that sort of tension as a footballer and don’t need to go looking for it now in my hobby!”

Kenny has nevertheless had considerable individual success. He has this year became champion for the third time at his club, Cotswold Edge, where his son Rod is head professional after being in the paid ranks for more than five years.

By way of a continuing foothold in the sport in which he is best known, Hibbitt, now 57, still works as an assessor of Premier League referees and has recently worked at the Albion v Hull, Stoke v Sunderland and Albion v Blackburn games.