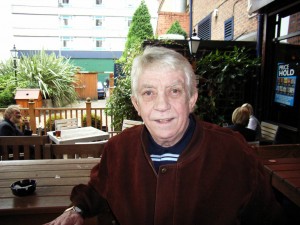 Three and a half decades on from the last of his Molineux walk-outs! Danny Hegan at 65.

He walked in 20 minutes late, which was no surprise. I had been warned that there was British Summer Time, Greenwich Mean Time and Hegan Time.

“Sorry, Dave, I’ve had the plumbers round. Can I get you a drink?”

And, so, one of the bigger post-war Wolverhampton Wanderers enigmas sat down for his first media interview in more than a quarter of a century and proceeded to fill in what we might call ‘the missing years.’

Danny Hegan admits he frequently went absent as a member of the Molineux playing staff. It seems highly appropriate then that he has vanished again big time in his post-playing decades.

“It’s got to be 20 years since I saw any of the Wolves lads,” he says, without apparent regret, in not-so-harsh Glaswegian tones. “I was out of the area for a long time after I left the club but I’ve also been back in Birmingham for a good while now.

“I’m just the sort of bloke who moves on, makes new friends and mixes with them instead. I’m not a yesteryear man.

“John Richards left me a couple of tickets for a game at Molineux when he was a director and I also spoke to Frank Munro by phone just after The Doog died last year. But that’s about it. I told him I hoped to attend the funeral then found myself moving home at the time and, with all the upheaval, I couldn’t make it.”

All Wolves fans of a certain vintage will remember Danny as a bit of a lad in his prime and I was unsure what sort of condition I would find him in when, in late September after a month or more of searching, I was led by one of his close pals to his door a short walk from Birmingham’s Broad Street attractions.

Okay, he looked like he’d had a few good nights out but the memory was still good, the speech clear, articulate and interesting. And he was well spruced up for our follow-up meeting several weeks later. So, to confront the most intriguing bit first, where has he been for the last 30 years?

“I had 11 seasons coaching football at Butlins,” he started. “Eight at Clacton and three at Minehead, and I had a great time. Colin Bell headed up the operation and Jimmy Greenhoff and Martin Peters also coached there, as did Bobby Moore as a guest.

“There were dozens of good players, although young boys, for whatever reason, often find other things to do with their time and drift away. But one of the best I saw was a small kid who was voted Boy of the Season once at Clacton – Kevin Keen. I’ve remembered him because I played against his dad and I wasn’t surprised that he made the grade, at Wolves and elsewhere.

“I loved taking the youngsters for days out at Arsenal, Millwall and QPR but nothing lasts forever and, when the coaching stopped, I went down to Plymouth to work for a year or two as a labourer for a plumber.

“Then I went to Corby, which is half-English, half-Scottish, full of Rangers and Celtic fans. I worked as an industrial cleaner for a friend who had his own business and it’s the best job I’ve ever had apart from in football. We had a great set of blokes and I enjoyed going to work.

“We’d be particularly busy when the factories around Milton Keynes, Daventry and Northampton shut down for holidays. I could be cleaning machines, painting or hoovering and I might have stayed there a long while but I had a yearning to come back to the West Midlands.

“I returned in about 1991 and did a bit more labouring and cleaning. There have been some different jobs as well, though. I worked back-stage in the Night Out in Birmingham for a while and I’ve spent three years doing odd jobs at Test Matches at Edgbaston and at the women’s tennis tournament just up the road from there.

“I’m 65 now and well retired, unless it’s just something like moving furniture for pals who ring up. I was hit by asthma in 1997 and have the inhalers but I’ve kept good health even if I do still like the occasional cigarette.”

He has enjoyed a drink over the years, too, although I notice that the pint I have bought him lasts the full 90 minutes of our conversation.

So where did that Jack The Lad image spring from? “The rebel in me took over,” he admits. “Bill McGarry was my manager for nine years altogether and was different class to me. I trusted him so much that, three times at Ipswich, I had signed contracts without even looking at the wage and bonus figures at the bottom of the form. I knew everything would be all right if he said it was. 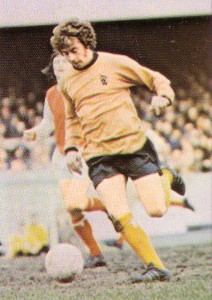 Taking on Arsenal at Highbury.

“I enjoyed my time at Wolves as well, although I know I didn’t fulfil the potential I had. I would describe myself as a very competent midfielder and the Wolves fans will be pleased that they saw a better side of me than the Albion fans had just before.

“But I had problems finding a house at one point, lived in a hotel in West Bromwich and needed a kick up the arse every now and again.

“This streak came out and if we were told to report at 9.45am, I would go in at 9.50. It’s just the way I was. I was never a betting man but would come into Birmingham for a drink and Bill fined me a few times; my fault, I just didn’t fancy going in.

“Eventually, I was told I could go and drink with my pals for a week. Bill came to the ATV studios near my house and told them I was suspended without pay. They showed a clip at the same time of me scoring at Old Trafford by chipping Alex Stepney from 20 yards.

“Sammy Chung handed me my training gear and I would go and run for an hour in the park on my own every day, then go to the pub.”

Hegan hasn’t been married since divorcing in 1975. Surely the opportunity for some liaisons arose, though, in his time at Butlins? “Can ducks swim?” he asks with a special twinkle. “I didn’t need to go knocking on chalet doors either. It was easier than that.”

A full and varied life, then, away from his 73 Wolves games and eight goals, and his seven Northern Ireland caps. He was also successfully sued by Billy Bremner over an article in which he was colourfuly quoted about the infamous Wolves v Leeds game of 1972. Odhams Newspapers, owners of the Sunday People, coughed up for him, as well as for themselves, and it’s a subject he doesn’t want to revisit all these years on. “Enough’s been said about that,” he says. “Let’s move on.”

There’s a school of thought that McGarry wanted Hegan to succeed Mike Bailey as skipper, so how does he feel now about the obvious lack of dedication that almost certainly cost him a longer and more rewarding career?

“I don’t even regret not having a proper chance with Celtic when I was a teenager. I was working as an apprentice plasterer when I had a trial there in the late 1950s, even before Jock Stein’s time as manager. I was invited back to play in a Probables v Possibles match but had signed for Albion Rovers by then.” 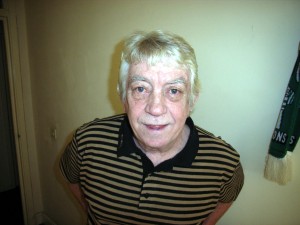 Alongside the colours of his beloved Celtic.

The green and white scarf draped above the hearth in his modest flat leaves no-one in any doubts as to his loyalties. It is a replacement garment for the original Lisbon Lions one he gave to his niece when she went to watch Martin O’Neill’s team play Porto in the UEFA Cup final in Seville in 2003.

When we met for the second time, Hegan was talking, with some apprehension, about the forthcoming Champions League game away to Manchester United, who he calls the ‘best team I have ever seen on the break in the land.’ And he relayed his fears that an early United goal could kill the tie.

He still loves his football and it’s clear that Wolverhampton Wanderers, for whom he played in the first UEFA Cup final in 1972, were an important part of his life once. But they came and went and he will never be chucked out of a pub for boring the regulars with his reminiscences about them.