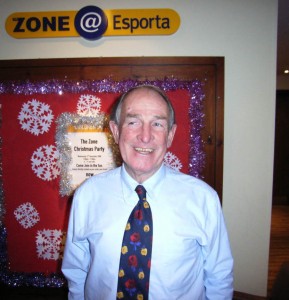 David Burnside - at the establishment where he ensures he stays fit.

David Burnside, a talented goal-scoring Wolves inside-forward in his prime, is still turning heads in the game more than 40 years on.

The Bristolian did much to groom the likes of Beckham, Scholes, Owen, Adams, Fowler, McManaman, Ferdinand, Butt, Sol Campbell, Andy Cole and the Neville brothers when in charge of the England youth team during more than a decade and a half with the FA.

Now it’s a different type of player development that fills his working life.

The 68-year-old is head of football development at Bath University, from where Team Bath have, astonishingly, reached the FA Cup first round for three of the last seven seasons and climbed into the upper reaches of the Conference South.

“It’s quite a story for a side made up of students,” said Burnside when he met www.wolvesheroes.com in Bristol earlier this month. “Nearly all the lads are on degree courses, their average age is 21 or 22 and our crowds tend to be about 90 – made up of girlfriends and other students.

“We have no real club culture and certainly no proper supporter base and, when you think we’re up against sides like Worcester City, Chelmsford, AFC Wimbledon, Havant & Waterlooville and Fisher Athletic, it is quite an achievement.

“We have had two promotions in the last few years and were just a local side ten years ago.”

A week and a bit ago, Team Bath narrowly failed to become the first university side in 128 years to reach the second round of the FA Cup when they unluckily lost 1-0 to Forest Green at their Twerton Park home.

They beat Salisbury City in the final qualifying round and were knocked out of the competition last year by Chasetown and in their previous excursion to the first round proper by Mansfield. 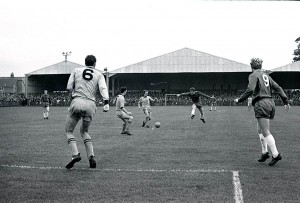 Burnside, facing the camera, challenges in a 3-1 win at Carlisle in 1966 - his first Wolves away game.

Burnside was recruited to Molineux by his close friend Ronnie Allen early in 1966-67 and played 27 games in Wolves’ promotion triumph that season, scoring against Crystal Palace on his debut within hours of his departure from Selhurst Park.

In total, he played 43 games for the club and scored five goals before moving to Plymouth.