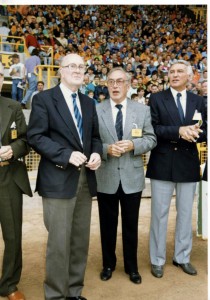 Stan Cullis is joined by Billy Wright and Eddie Stuart on the 1992 day on which the stand named after him was officially opened.

A two-page feature on Wolves’ finest ever manager is included in the latest issue of the fast-growing Backpass football nostalgia magazine.

The piece, headlined ‘Cullis, A True Giant’ is accompanied by tributes from Matt Busby, Stanley Matthews, Dennis Wilshaw and Johnny Giles, and by two little-seen photographs of the man himself.

And the article isn’t the only one in the stirring 52-page magazine that will interest Wolves supporters.

Backpass was launched at the start of last season by Midlands-based journalist Mike Berry and covers football in the 1960s, 1970s an 1980s.

The magazine is now available in many branches of WH Smith, including Wolverhampton, Sutton Coldfield and Birmingham, as well as selected other newsagents across the region. 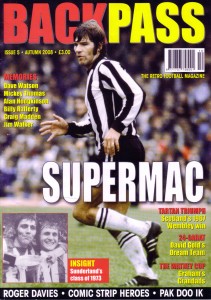 It costs £3 but can be purchased more cheaply on a subscription basis. Details of how to order can be found on the inside cover of the latest issue, by clicking on the Backpass icon among the adverts on this website or through the link http://www.backpassmagazine.co.uk/

* There was a strong Wolves old boy representation at the recent Scunthorpe v Leicester League One clash.

The Iron chose to stage a minute’s silence before kick-off for Geoff Sidebottom, the former Wanderers, Aston Villa and Scunthorpe keeper who died earlier this month. And among the crowd was Graham Taylor.

In addition, as well as having Mike Stowell as their goalkeeper coach these days, Leicester have defender Marc Edworthy in their squad.