Safe! The Medal Lost Due To Mischief

A Valuable Dig In Alex’s Memory 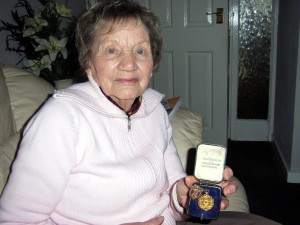 A medal won by one of Wolves’ 1939 FA Cup final players is back in safe keeping after lying buried in a garden in Hampshire for the best part of 20 years.

The treasured keepsake, belonging to Molineux inside-forward Alex McIntosh, was taken by his widow Gwen to show her five-year-old grandson Craig in Portsmouth in the early 1980s.

But she gave it up for lost after discovering that she had returned home with an empty box and finding that no-one at the house had any idea as to the item’s whereabouts.

It was only when the same garden was being dug in the late 1990s that the medal, presented to Alex in recognition of helping Wolves win the 1937-38 Staffordshire Senior Cup, came to the attention of the house’s subsequent occupants – and was despatched to Molineux.

“I never thought I’d see it again and had just thrown the box away,” recalled Gwen. “We had no idea what had happened to it but apparently one of the families who lived at the house in the 1990s had a little girl, who was playing one day while the garden was being dug.

“She was spotted trying to put something in her mouth and it turned out to be the medal we had lost. Thankfully the people saw Wolves’ name engraved on the back and kindly sent it back to the club.”

Gwen’s nephew, Tony Bibb, who lives near her in the Cannock area and is a long-time Wolves season ticket holder, played his part in reuniting the medal with its rightful owner. And he shed some light on why it might have gone astray for so long.

“We can only assume that young Craig, like little lads are inclined to do, had a bit of fun with the medal,” he said. “He must have taken it into the garden, where it became lost and eventually hidden.

“We’re just grateful that it later came to light and that the family concerned were good enough to send it to Wolves. It was in the museum there for a few years before my aunt decided she would like it with her. 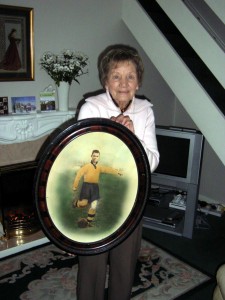 Another family keepsake - a painting of Alex done by a Scottish artist.

“So now the Staffordshire Senior Cup medal is safe and sound alongside the one he won for playing at Wembley.”

Scottish-born Alex made 50 League and Cup appearances for Wolves between 1937 and 1947 and would have played many more matches had it not been for the outbreak of hostilities, during which he was taken prisoner of war in France in 1945.

He moved on to Birmingham and Coventry after leaving Molineux and died in Cannock of a heart attack in 1965, aged only 49.