Where Christmas Really Was White 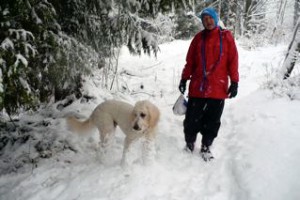 Les and 'Scholzey' beating a path through the drifts.

As the second and concluding part of our New Year mini series about how former Wolves favourites have been spending the festive season in distant parts of the world, we now profile Les Wilson.

Following the piece at the weekend about Bobby Gould and his family spending their winter in sun-kissed New Zealand, the temperature gage plummets as we this time go west.

Les, whose post-Molineux career is given a full airing in the Features section of this website, has been resident for many years in Vancouver, where he and wife Lois have over Christmas been making the most of the area’s heaviest snowfalls since 1964.

Their part of Western Canada is accustomed to British-style mild, wet winters but this one has been reminiscent of the severe ones several hundred miles further north or east. 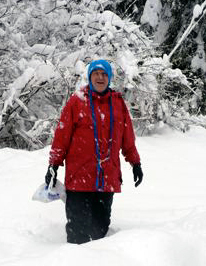 “This is the worst winter on record for cold and snow,” Wilson said. “We normally have one or two snowfalls in January and the rest of the winter is very mild.

“We have had more snow this winter than the last 15 years combined. It has been unbelievable really. We now know what the rest of Canada has to endure during their long winters.”

It’s not unheard of for the Wilsons to see bears scavenging their neighbourhood for food but the sightings have been a little different in recent weeks, with a trio of bob-cat cubs being spotted by a neighbour.
And it’s quite common for coyotes, cougars and deer to infilitrate gardens.
“It’s nature in the raw,” Wilson added, “and all the more remarkable as we are so close to urban centres. The deer are in our garden all the time. Nearly every day, we see three or four of them.
“We’re very lucky to have these wonderful creatures around us and to have this sort of outlook. And it makes hiking in these parts very interesting. 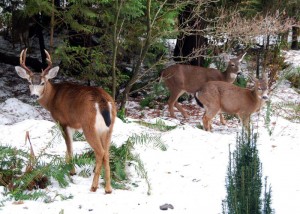 “You can’t believe sometimes that we are only five minutes from the cities of Port Moody, Coquitlam and Port Coquitlam – areas that have high-rise buildings, shopping malls and motorways.”