An Ode To Hugh 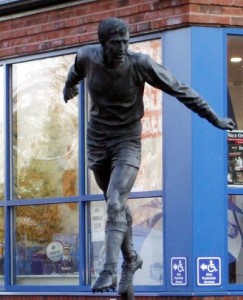 A Wolves fan has penned a tribute to Hugh McIlmoyle and illustrated it appropriately following a trip to see the statue of his first Molineux hero.

As befitting his passion for poetry, Wolverhampton-born Robbie Kennedy Bennett describes himself as A Wanderer With A Scottish Heart, A Man Divided In Two, A Fortunate Man Is Who I Am, At Home In Gold And Blue.

He has previously written in verse about the Billy Wright and Stan Cullis statues but dropped in during a visit north of the border with his wife on the one that stands in McIlmoyle’s honour outside Carlisle’s Brunton Park ground.

His football work can be seen by visiting the link http://www.rkbpoetry.co.uk/page38.htm and includes the ode ‘I Suppose It Was Hughie McIlmoyle.’

“I sent an ode to www.footballpoets.org about my love for Wolves being Hughie’s fault,” Robbie told us. “He reminds me of my first seasons of going to Molineux.

“When we called at Carlisle, I had great pleasure in telling the lady in the club shop that he was my first football hero and she told me her lad is a goalkeeper on the books of Queen of the South.

“What a good likeness the statue is – well worth looking at on our way up to Dumfries.”

Robbie, who lives in Codsall, includes ‘Steve Bull A Great Wanderer’ among his other works.

Of his 1960s Molineux hero, though, he writes in the last verse: 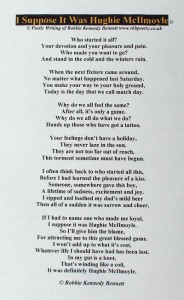 If I had to name one who made me loyal

I suppose it was Hughie McIlmoyle

So I will give him the blame

For attracting me to this great blessed game

I won’t add up what it has cost

Whatever life I should have had has been lost

In my gut is a knot

It was definitely Hughie McIlmoyle