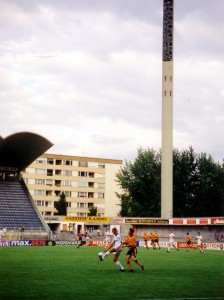 Sir Jack Hayward once said that one of Mark McGhee’s greatest strengths was remembering the names of all the players he had signed for Wolverhampton Wanderers.

It was less than veiled criticism of the Scot’s management of the club in 1998 after he had, shortly before their appearance in the FA Cup semi-final against Arsenal, unveiled five newcomers together – Steve Claridge, David Connolly, Robbie Slater, Stephen Wright and the returning Neil Emblen.

Not surprisingly, noses were pushed out as a result and there was some making-up to do a few months later when, for the second time in three summers, Wolves set off on a pre-season tour of Austria and Germany.

Claridge hadn’t scored in any of the six appearances he had made at the end of 1997-98 and was vowing to win over sceptical fans while Dougie Freedman was intent on a fresh start after falling out with McGhee, the man who bought him from Crystal Palace only the previous October.

As if that wasn’t enough, Keith Curle had had a bitter mid-July slanging match in the Press with managing director John Richards over contract talks and the skipper’s place in the 18-man tour squad was in doubt virtually up to the moment he checked in at Birmingham Airport on a Salzburg-bound flight at the start of the 12-night trip.

Wolves had to do without Robbie Keane, who was away at a youth tournament with the Republic of Ireland, and had a tough opening assignment against top-flight opponents who had played in Europe in two of the previous five seasons. 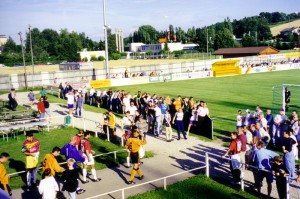 Wustenrot Salzburg had also had two players at that summer’s World Cup finals and ran out convincing 2-0 winners on a warm evening on which Steve Bull was captain because of a slight injury Curle was nursing.

There was an unfortunate legacy of the defeat, with Steve Sedgley taken to hospital with an ankle injury. The utility man would be sent home within a couple of days but not before demonstrating his devilish sense of humour when, sitting in a car full of players on their way back down from a punishing training run up a mountain, he turned the heating up to maximum.

Tony Daley twice and Adrian Williams had also been flown home early from trips in the mid-1990s and, with Freedman struggling because of sore shins, Steve Corica – himself without a start for 14 months following two cruciate knee operations – was hastily summoned from England.

Wolves were staying a few miles along the valley from where Arsenal and Benfica were bedded in for pre-season commitments of their own. But they were failing to hit the heights that such giants are used to scaling.

They suffered a second 2-0 defeat on Austrian soil when a Saturday night game switched 30 miles to the industrial town of Grieskirchen saw them outplayed by Lask Linz. 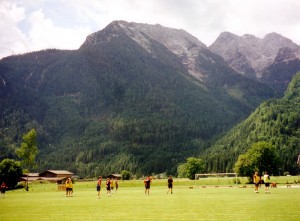 Not the worst place in the world to prepare for a new season......

In the hosts’ ranks was Eugene Dadi, the striker Wolves had had on trial on their two-game tour of Scotland in 1997, and McGhee’s men were struggling to escape the worrying goal shortage that had hastened their alarming slide the previous spring.

It was ironic then that Richards, scorer of a cool 194 goals for the club, should arrive to watch the middle two games of the tour – and to play in a training game which thankfully saw him on the same side as the now fit Curle!

Wolves left behind their idyllic Alpine base for the four-hour drive towards the old East Germany, where the temperature would reach the mid-90s – and that in the early evening.

Several members of their party had to move into a different hotel as there weren’t enough beds in their new HQ near Nuremberg, a problem caused in part by the presence of several foreign trial players who were seen in training but not in matches.

Richards was looking forward to the third game, against Carl Zeiss Jena, as it presented him with the prospect of a return visit to the stadium where he had scored the winner in a European tie more than a quarter of a century earlier. But he was disappointed at a switch of venue to a bumpy, sloping pitch an hour away in the town of Schleiz, where he was nevertheless introduced to two players he had faced in that UEFA Cup assignment.

A 1-0 victory over Jena, secured by a 21st minute Bull goal, lifted Wolves’ spirits and the performance of Curle at the centre of defence was another reassuring sight. Not that the skipper was taking anything for granted. “I could be here for two days, two weeks or two years,” he said as he reflected on Wolves’ decision not to extend a deal that still had a year to run.

Wolves fan Kelvin Weatherer had presented the host club with a mounted programme from the 1971 Wolves v Carl Zeiss meeting and there was another friendly supporter gesture when Manchester-born Phil Painter welcomed members of the touring party to his adopted home city of Berlin 24 hours later by handing them souvenir pieces of its famous dismantled wall! 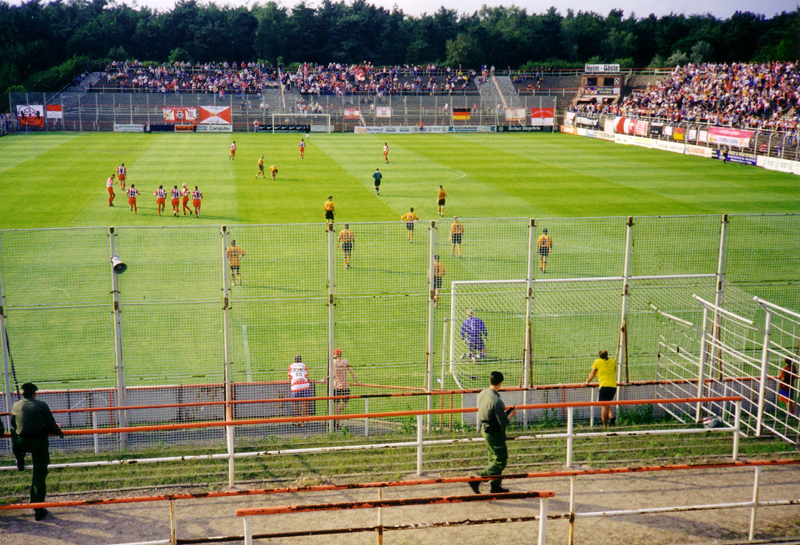 Mike Stowell on his knees as Wolves trail to Union Berlin.

The Friday night game against division three club Union Berlin started badly for Wolves, who had made a six-hour journey on match-day to the once-divided city. They fell behind after only three minutes but rallied to win 2-1 with spectacular second-half left-foot strikes by Carl Robinson and Paul Simpson to bring the curtain down on their stay on the Continent with a record of two victories and two defeats.

The start of the 1998-99 season was only two weeks away when Wolves flew home the following day and, yes, Curle did stay at Molineux; for another two years, in fact. McGhee, however, departed in the November.