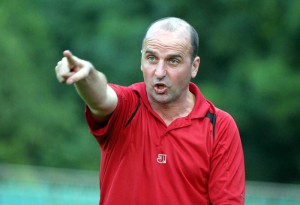 Paul Cook has turned his back on European football by leaving his job at Sligo Rovers – but hopes the parting of the ways might be temporary.

The 41-year-old former Wolves midfielder was today said to have left the League of Ireland club by mutual consent, two and a bit months after he led them into the inaugural UEFA Europa League.

But he quickly stressed in an interview with www.wolvesheroes.com: “I would like to remain as Sligo manager if we can come to agreement. The key thing is that I want to be a successful manager, not just pick up my money and go through the motions.

“I’ve had a very happy couple of years there and reaching Europe was wonderful for everyone because the club hadn’t qualified for well over a decade.

“But Irish football is having a very tough time of it at the moment and it’s a brutal reality these days unfortunately that finances are so important.

“It was felt necessary that we had to reduce our budget, either by cutting back on the number of players or by letting some of the higher earners and better players go and replacing them with cheaper alternatives.

“Having had a bit of success, I wasn’t prepared to do that, although I would be keen to return if ways round the problem can be found. I certainly haven’t taken this decision so I can walk into another job.”

The club, from 125 miles north west of Dublin (average crowd: 2,000) followed up their sixth-place finish in Cook’s first few months in charge in 2007 by coming fourth in his first full season.

And that has left them looking forward to playing in the Europa League, the re-branded version of the competition that has been known as the UEFA Cup since the season Wolves reached its first final in 1971-72.

“There’s a lot of excitement around the place at reaching Europe,” Cook added. “The club’s last appearance was some time in the mid-1990s in the InterToto Cup, although I’ve been saying that success for us in it would be to get through one round.

“We’ve also qualified for the Setanta Sports Cup, so they have been good times. I’ve enjoyed working there but I’m aware that it’s the manager who takes the bullets if signings don’t come up to scratch for whatever reasons. And I wasn’t prepared to put myself in that position if my hands were tied.”

Even Cook’s permanent departure from the club known as the Bit O’ Red wouldn’t spell the end of his interest in European football for 2009. 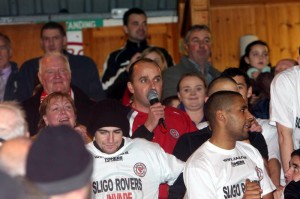 Addressing the fans after Sligo qualified for Europe in November. Picture by kind permission of Sligo Rovers.

He and his son are flying out on February 24 to see their beloved Liverpool face Real Madrid in the Champions League.

And his absence from pre-season training at Showgrounds means he can also be at Wednesday’s FA Cup fourth-round replay at Goodison Park – his second Merseyside derby in a couple of weeks.

Cook, who played 214 games for Wolves between 1989 and 1994, was shortlisted in the autumn for the Eircom League Personality of the Year award.