Loyal Servant Who Said No To Clough 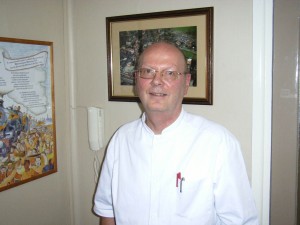 Toby Andersen at his clinic today in Dudley.

He never scored a single goal, stopped an opponent pouncing at the other end or had his name chanted by the Molineux crowd. But he was part of the furniture for the best seasons Wolverhampton Wanderers have known since their glory years under Stan Cullis.

Norwegian-born Toby Andersen wasn’t just any old physio. He helped nurse Wolves’ skipper back to fitness where his long-serving predecessor had failed, he possibly saved Derek Dougan’s life in a derby against Albion and he even organised two pre-season tours to Scandinavia.

Which might explain why Brian Clough once tried to take him to Nottingham Forest and why Albion made at least two attempts to lure him across the Black Country.

Andersen said ‘no’ each time, though, and has underlined his devotion to Wolves by remaining a season ticket holder to this day.

Things might have worked out so differently had the placement he was sent out on in the final year of his physio training at Wolverhampton’s Royal Hospital in 1969 taken him to Stoke Mandeville, Oswestry or any of the other locations to which his fellow students were despatched.

Having gained his football coaching qualifications back home, he was sent to Wolves and worked alongside George Palmer, who was struggling to get Mike Bailey back from a persistent hamstring injury. “George was physio at Molineux for many, many years but was coming towards the end and wasn’t up-to-date with all the new techniques,” Toby recalled.

“With all my enthusiasm, I tore into Mike with my massaging and introduced a warm-up to his training routine. I couldn’t believe warm-ups weren’t really part of the game here because I once wrote a thesis on the subject and had noticed that Dave Wagstaffe’s idea of a warm-up was to have a cigarette in the toilet! 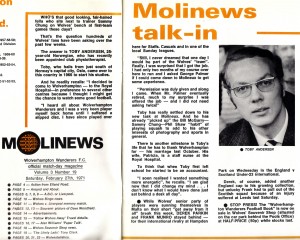 How Wolves' programme reported his appointment.

“The result with Mike was that he was able to keep going where he had previously broken down – and he was soon fit. George asked me to ask my principal if I could do a second week at the club, then it became a third and after that the offer of a job.

“George had said he was leaving at the end of the season, so they chose me to take over, although I struggled for a work permit and worked part-time at the hospital and with Wolverhampton-Bilston Athletics Club to strengthen my case.”

Andersen subsequently travelled the world with Wolves and even served as assistant manager to Sammy Chung when Bill McGarry opted out of the Australia and New Zealand legs of the mammoth 1972 end-of-season tour that also took in the United States.

Amused that his Norwegian passport eased him through immigration control in a fraction of the time it too Wolves’ players to be admitted, he clearly showed an organisational flair that impressed his employers.

So much so that after he left for a job back home immediately after the 1974 League Cup final victory over Manchester City, he set up two Wolves close-season trips to Norway in the following few years.

“On the one visit, they played in my home town of Skien, south of Oslo, and the players were woken by cannon shots at 5am,” he added. “The lads thought the firing was to commemorate their arrival but it was May 17, National Day, and this is how Norwegians celebrate that date.

“I think Wolves won 8-1 against Odd Skien and went on to play Vinstra. The players moaned that the flight between the two places was the worst and noisiest they had ever known. Mind you, it was an old warplane!”

Andersen, whose full Christian name is Torbjorn, married a West Midlands woman and returned from Scandinavia to set up a physiotherapy clinic in Dudley. More than 30 years on, he is still running it, now approaching his mid-60s.

Julie Walters’ brother Kevin did the Molineux job for a while in the mid-1970s but, following his departure, Wolves’ problems with successors prompted them to re-engage Toby for a part-time second spell 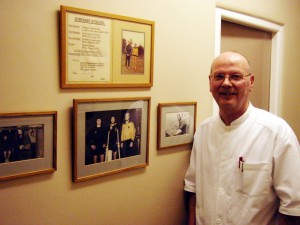 The Doog presumably applauded the decision. After a clash of heads with John Wile at The Hawthorns in 1972, the striker was in big danger until expert healing hands got to work.

“It was unusual for Derek to go down injured but he hit the ground as if he had been shot,” Toby revealed. “He was drowning in his own blood because he had broken his nose and the blood was running into his lungs rather than out of his nose.

“I straightened his nose out there and then and, as soon as I did, he coughed blood up and started to recover. But it was very nasty for a while. He was extremely pasty.”