The Wrath Of McGarry 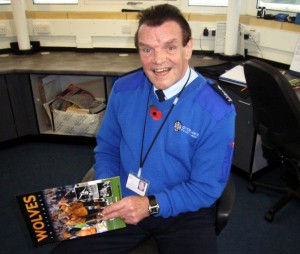 Hughie Curran - happy in his work and reading up on old times.

Hugh Curran has revealed how Bill McGarry once tried to bounce him into a move to Ian Greaves’ Huddersfield – and cost him a big anniversary night out with his wife.

The Scottish international striker was alerted to the possible deal during Wolves’ historic run to the 1972 UEFA Cup final, only for it to break down and send the Molineux boss into one of his characteristic strops.

“It was straight after the away game against Juventus in the quarter-final, when the lads were thinking about having a drink or two, that Bill came over to me,” Curran said.

“He said: ‘Don’t drink too much tonight, you’re getting transferred tomorrow.’ I’d been told nothing about it and waited for him to tell me that it was Huddersfield.

“They met me the following day after we’d flown home and drove me to their ground where I told them I wanted to be back in Wolverhampton that night as it was our wedding anniversary and had a celebration planned.

“I had talks and they made me a decent contract offer and, as I played snooker in the players’ room while I waited, I actually saw on TV that I had signed for them!”

Curran, who scored goals at the terrific rate of just under one per every two games in nearly 100 matches for Wolves, underwent his medical and expected to be joining the Terriers’ fight for top-flight survival.

But, having stayed overnight and left his wife disappointed, he was found to have a dormant knee problem that prompted the Yorkshire club to pull out of the deal.

“I was pig-sick and returned to Wolverhampton, where Bill was definitely not amused,” Curran added. “He stuck me straight in the reserves.” 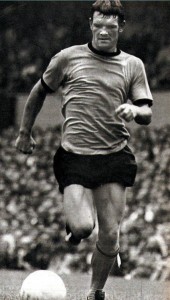 In full flow with Wolves.

Curran had played his last League game for Wolves but compensation came for him when he went on as a substitute in the second leg of the UEFA Cup final at Tottenham two and a half months later.

He did get his move out of Molineux in the September – to Oxford, though, not to Huddersfield. And he did ultimately link up with Greaves when he signed for Jimmy Armfield at Bolton and found the former Manchester United to be the manager’s assistant.

Curran, now 65, was tracked down by Wolves Heroes in November to his office on the Thornhill park and ride scheme just outside Oxford.