A True Terrier And A Top Bloke

What worth is there now to the stroke of fortune Paul Birch enjoyed on the evening of his testimonial game in 1991?

The good luck he had in timing his big night to coincide with the first hero’s return of David Platt to Aston Villa from a new life in Italy turned a healthy crowd in the Second City into a bumper one.

Platt’s golden touch at the previous summer’s World Cup had made him an international superstar, so here was an opportunity for Villa fans to not only pay tribute to a home-grown lad who was by now playing on the other side of the Black Country but also to say goodbye to the England hero who had joined Bari for £5.5m not long before. 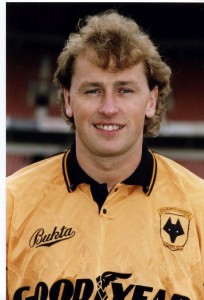 Paul Birch, with distinctive locks, soon after his Molineux arrval in 1991.

The supporters and the lolly rolled in and Birchy seemed kindly blessed as he enthusiastically strutted his stuff for a Wolves side who beat his former club by the odd goal.

His bank manager would have been wearing a big smile, too, but such riches appear trifling almost two decades on when measured against the cruelty of ten-year-old Olivia Birch losing her Dad at the age of only 46.

It’s customary for platitudes – no pun intended – to be uttered on occasions such as Friday’s moving funeral at West Bromwich Crematorium. In this instance, the turn-out said everything.

There weren’t just the former Wolves team-mates who you would have put your gold and black shirt on being there, like Bully, Thommo, Psycho, Mutchy, Stowell, Dennison and Goodman.

Darren Simkin, Kevin Ashley and Jamie Smith also showed – lads who are no longer in the bosom of the Molineux family but whose lives were touched by the infectious personality of the friend they had lost.

They remembered the team-mate who grafted at their side on match-days – and that’s EVERY match-day – and traded barb for barb with them in the unforgiving environment that is a football dressing room.

At one time, Birchy had the alternative nickname of ‘Aussie Rules’ in recognition of how, even on the coldest mornings winter could deliver, he would roll up his sleeves and throw himself full-on into training, his limbs protruding from his tight kit.

In his five years at Molineux from 1991, he may have failed to repeat the promotion triumph he helped bring about in one year under Graham Taylor at Villa in 1987-88. But the 166 games he played bear testimony to his lengthy usefulness to the side and he certainly dug them out of a hole or two.

On the night Sir Jack Hayward famously stood on the South Bank as what we perceived to be the prelude to sacking Graham Turner, Birchy scored the late goal against Grimsby that salvaged three points from a bereft performance and earned his manager a reprieve.

He hit an absolute belter in the return fixture at Blundell Park a few weeks later to set up another vital victory and ended that troubled season of 1991-92 with ten goals.

When the storm-clouds descended again in the autumn of 1993 and Wolves hadn’t won in five games, he came up with another crucial goal in an awful first half at home to Notts County. It was a real pressure time for the manager but the 3-0 victory that eventually materialised proved a further turning point.

Birch’s fee of £400,000 reflected the fact he had previously played 219 matches for Villa and, in one of them, performed magnificently as a man-marker of Lothar Matthaus on the night Jozef Venglos’s side beat Inter Milan 2-0 in the West Midlands.

He was a good player; possessing of the busiest feet you ever saw, a cute football brain and a sense of industry that supporters warmed to. Off the field, not once do I recall him being anything other than cheerful and amiable.

His place in Molineux’s history books is underpinned by the fact that he is among the few sets of brothers to have played first-team football for the club, his elder sibling Alan having worn Wolves’ no 7 shirt 18 times in the early 1980s. 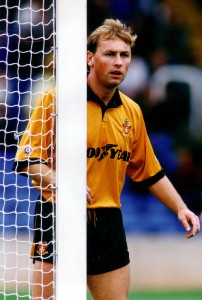 More pertinently, his passing-away reminds us of our mortality. News of his terminal bone cancer broke last May on the very day that we learned of Mark Kendall’s death, prompting another of the duo’s Wolves colleagues to say: “With Rob Hindmarch going as well, that’s three of my team-mates who have died in their 40s.” When you consider that Derek Dougan, in 2007, became the first of the club’s 1974 League Cup winners to be taken away, that’s quite something to come to terms with.

Paul Birch died on February 2, bizarrely 18 years to the day since he highlighted his Wolves debut by sidefooting in one of the goals in a 2-1 home victory over West Ham. The good fortune Birchy had with his testimonial may seem hollow now but he would have been proud on Friday of the second huge turn-out in his honour.