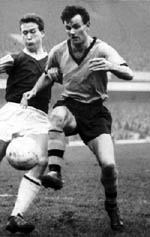 Jimmy Murray - on the prowl for Wolves against West Ham at Upton Park.

A lengthy appreciation of the career of prolific Wolves forward Jimmy Murray is one of the major articles in the latest issue of the thriving football nostalgia magazine, Backpass.

The 18-paragraph tribute by Ivan Ponting carries the suggestion that the man who scored 166 goals in 299 League and Cup appearances for the club would have won England caps had it not been for the ‘ludicrously archaic’ selection committee still in place at the time.

Detailing a long list of men who were used instead in the centre-forward role, including Ray Crawford and Jimmy’s subsequent forward partner at Manchester City, Derek Kevan, Ponting writes: “Without denigrating their undoubted abilities, surely Murray’s claims were on a par with at least some of them…..

“……what he brought to the Molineux mix was skill, mobility, intelligence and that most precious of all qualities for any front-man, a poacher’s instinct for arriving in front of goal at the optimum moment.”

The words, some five months after the death of the Kent-born forward at the age of 72, appear on the same page as a lengthy obituary of Ian Greaves, the former Wolves boss who passed away at the start of January.

And there are other articles to interest Wolves fans in this sixth issue of Backpass, the glossy 52-page publication focusing largely on football in the 1960s, 1970s and 1980s.

Stafford-based Daily Telegraph writer Phil Shaw has penned a two-page article on Wolverhampton-born John Rudge while David Instone has spotlighted the city’s most famous referee, Jack Taylor, with whom he looks back on the official’s decisive handling of the 1974 World Cup final. 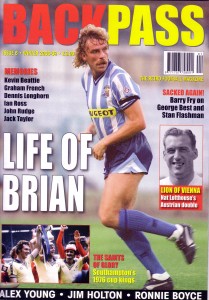 Elsewhere is a lengthy interview with former Wolves coach Ian Ross, albeit one concentrating mainly on the Scot’s exploits across the West Midlands at Aston Villa.

Issue seven, which is out in the spring, is due to feature a major piece about Derek Dougan.