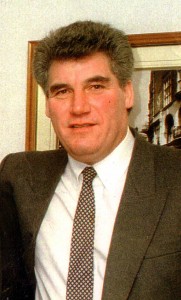 Phil Parkes insists he’s fighting fit again despite following up some early-winter surgery with a freak accident on the golf course.

The long-time Wolves goalkeeper had not long undergone laser treatment on his right eye than he was hit in his left one by a golf ball struck by himself.

But he is already back on the fairways and just relieved that things weren’t a lot worse.

“I was playing out of the rough at Chesterton Valley on the way to Bridgnorth when the ball came back off a tree and smacked me in the face,” he said.

“It was a bit embarrassing, although I was only two or three yards from the tree, so I obviously had no time to react. I was down on the ground, with my face covered in blood.

“The people at the hospital told me I was lucky that the ball seemed to hit me at the top of my cheekbone first, otherwise it could have been more serious.

“And if it had happened to the same eye that I’d had the laser surgery on, it would have made it worse.”

As if to underline the fact that he’s back in good nick, Lofty has been playing this week at The Shropshire, near Lilleshall.

He plays off a handicap of 18, often in the company of former Molineux team-mate Steve Daley, with the likes of Derek Parkin and John McAlle as other occasional partners.

A dashing figure in his early Wolves days.

“I love a game and I’m relieved the eyes are still okay as they are so precious,” he added. “There’s a bit of a blur from the one I had the laser surgery on but it’s still better than it was.

“I can still see where my ball comes to rest – unfortunately that’s probably because I’m not hitting it as far!”