Not At Any Price!

Something Worth Putting Your Shirt On 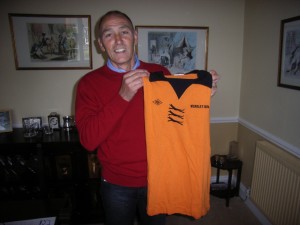 A quite golden memory.

John McAlle has reacted with shock and horror to suggestions that he had sold his 1974 Wembley shirt – and has unwrapped the valuable keepsake again as proof.

An item on eBay revealed recently that a no 6 Wolves shirt from that year had been bought by a fan based in Dudley.

A friend of www.wolvesheroes.com contacted us hoping we would check the story out and, when we did so, the long-serving central defender was both emphatic and greatly surprised. “I would NEVER sell that,” he said.

McAlle subsequently checked that the jersey he wore with such distinction in the 2-1 victory over Manchester City was still in his safe keeping and then happily posed with it.

“Yes, it’s still here,” he added. “I know some players sell old stuff and that’s their choice but I would hate to part with mine.

“It was such a memorable occasion for the club and I want to keep that shirt as a reminder of a magnificent day.”

Closer inspection of the eBay write-up reveals that the sold shirt bore the words ‘FL Cup Winners 1974′ on the front, so the jersey therefore has to be one worn by Wolves’ players after their Wembley triumph, not during it.

As such, it is unlikely that the club would have encouraged the players to keep them.

McAlle, 59 and now retired, is sixth in Wolves’ list of appearance-makers, having made his debut for them at Chelsea 41 years ago this month and signed off early in May, 1981. 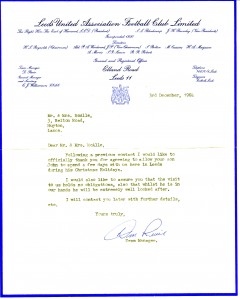 Revie writes....the contents can be magnified by right-clicking on the letter and performing a 'save picture as' function.

But he could now have been living in Harrogate or Skipton, rather than near Brewood.

The letter on the left is dated December, 1964, and signed by Don Revie after the young Merseysider was invited to a trial at Leeds.

Norman Hunter might have had something to say about it but McAlle may even have faced Wolves in those huge matches of 1972 and 1973 had his career taken the alternative path.