Victories All The Way On Run-In 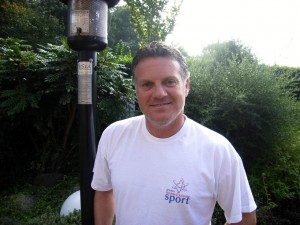 Andy Sinton is hoping to follow up his Ryman Division One South Manager of the Month award by leading his club Fleet Town to their first-ever title at that level.

The former Wolves winger oversaw the terrific record of eight wins and two draws from the ten games Fleet played in March and is praying that his personal recognition is just the start.

For his club, having lost out in the play-offs for the final two seasons, are hoping they haven’t left it too late for automatic promotion this time.

With four games to go for each of the title-chasing clubs before today’s clash with Whitstable Town, they trailed leaders Kingstonian by five points and second-placed Cray Wanderers by two.

But the leading two face each other on Monday at a time when Fleet are also through to two cup finals and three semi-finals.

All that after they have gone as far in the FA Cup in each of the past two seasons as they ever have.

Fleet, known as the Blues and based on the Surrey/Hampshire border, attract gates of fewer than 200 but won 2-0 at Chipstead last Saturday to take their record to six victories and two draws from their last eight league matches. Their season ends on April 25.

Sinton, now 43, joined Wolves ten years ago this summer and played 82 times in his three-year stay at the club.

All told, he made nearly 620 League appearances in a career that was highlighted by the winning of 12 England caps.