Hibbitt Still At Home From Spot

Easy Does It For Kenny 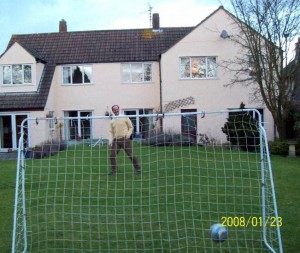 Take aim, eyes fixed, get in!

It may not be Molineux’s South Bank at his back and the goal is perhaps a shade smaller than he is used to but there’s something unerringly familiar about the pose and outcome.

Even in his slippers and with his Gloucestershire home as the backdrop, Kenny Hibbitt decides hard and low is the still best bet for penalties.

The impromptu session was staged when the much-loved midfielder was visited by Yorkshire Wolves members Steve Wright and Jim Fisher for a feature in the newly-published spring issue of the club’s fanzine The Musketeer.

The pair spent no fewer than six hours with the Bradford-born honorary Yorkshire Wolves president, who learned his trade at the local Park Avenue club before embarking on a Molineux career of 574 first-team games – second only to Derek Parkin.

“It was brilliant of Kenny to make us so welcome and very special to spend such quality time with him,” said Steve, whose article stretches to several pages in the fanzine that he himself edits.

“Kenny was a friend of my Dad’s from around 40 years ago and I knew him from the age of about nine until into my 20s. It was great to see him again and interview him at length.” 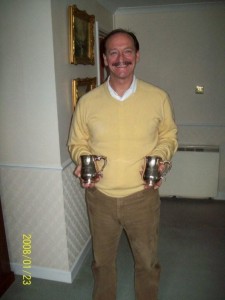 Double cup holder! Kenny with his Wembley victors' tankards from 1974 and 1980.

Hibbitt included nerve-jangling penalties at home to Tottenham in a League Cup semi-final and at home to Coventry in an FA Cup quarter-final in his haul of successful spot-kicks.