Ranks On A Tour Of Duty 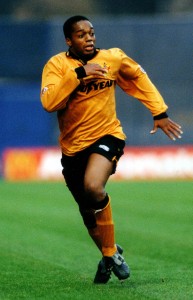 Mark Rankine on the prowl with Wolves a decade and a half ago.

Mark Rankine had toyed with dropping in at Molineux this weekend for the last-day Championship clash between the two clubs with whom he made his name in football, Wolves and Doncaster.

Instead, corporate duties have beckoned him to another of his former stomping grounds, Preston, but only after he first heads to Peterborough’s promotion party on Saturday for some back-slapping with his good pal Darren Ferguson.

The two came through the Old Trafford system in the late 1980s but as part of different intakes, so it wasn’t until they were thrown together at Wolves in 1993 that, as it were, they became united.

They have remained close ever since and Rankine plans to attend the final League One game at London Road, against Swindon, before Posh step up for the second successive season.

“That’s if Fergie gets me a ticket!” he laughs. “I’ve seen them three or four times and more than that last season, so maybe he’ll remember me.

“He has done a great job and likes to see football played the right way. I’m absolutely delighted he has done so well in his management career already.

“We hit it off almost as soon as we met at Wolves. Although we didn’t seem to play in central midfield very often together, we both lived out at Sutton for a while and used to travel to training and the ground in one car.

“I keep on hinting now about a coaching job with him but he refuses to take the bait! I work, though, with a group of players’ agents, one of whom looks after Karl Henry at Wolves, so maybe we can now think about trying to get more players into Peterborough in addition to Gabriel Zakuani, who Darren took from Fulham last summer.”

Rankine, 40 later this year, has travelled on business to Hungary, Switzerland and Italy in the last month and, in a typically hectic domestic weekend, saw the Sheffield United v Swansea and Arsenal v Middlesbrough games before programming his sat-nav in preparation for the Chelsea v Tottenham reserve match tonight.

He will also squeeze in a visit on Sunday to QPR’s clash at play-off hopefuls Preston, where he is so highly revered after his near-300 North End appearances as to have had an executive box named after him among those dedicated to the likes of Tom Finney, Howard Kendall and Mark Lawrenson. 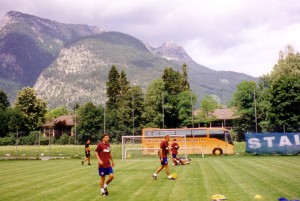 Darren Ferguson (foreground) training with Wolves in Austria in 1998.

“I would love to have been at Wolves to see them play Donny but there’s a parade on the pitch at Deepdale, which I’ve agreed to take part in,” he added.

“There’s also some meeting and greeting to be done and I’m hoping to see Preston edge into the play-offs. It has been a brilliant season for nearly all my former clubs so far.”

Rankine, who now lives in North Yorkshire, made 167 appearances for Wolves from early 1992 to late 1996 and later played for Sheffield United and Tranmere as well as Preston. He played a staggering 618 League games alone in a playing career spanning almost 20 years.