When Four Was A Par ‘Score’

Westcott’s Food For Thought For Arshavin 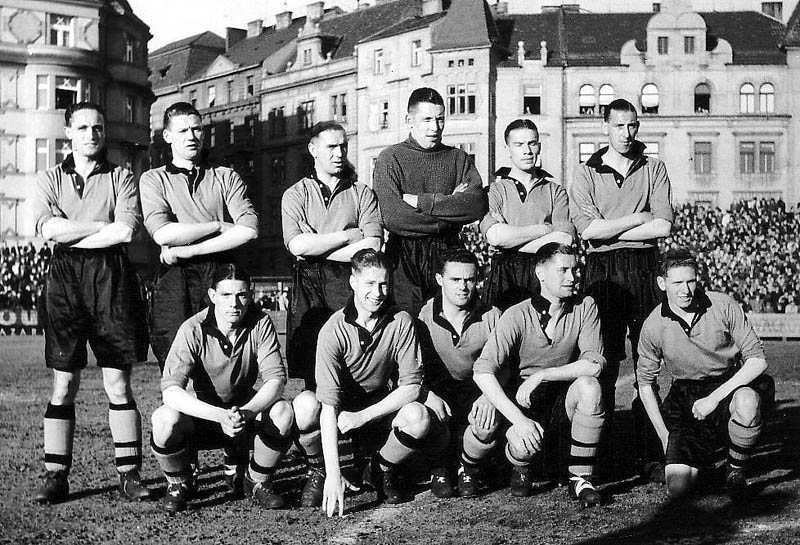 Dennis Westcott, one in from the left on the back row, lines up with his Wolves team-mates on a Continental tour.

Much though Wolves Heroes concentrates largely on players still living and in many cases who are part of the Internet age, we are delighted to take occasional opportunities to cast our net a little further back.

And the appearance of Dennis Westcott’s name in the sports pages in the last couple of weeks represents just such an opening.

The colossal 1930s and 1940s marksman was mentioned in despatches following Andrei Arshavin’s heroics for Arsenal against Liverpool 12 days ago, when he became the first visiting player to score four goals in a League game at Anfield since Westcott hit four there in a 5-1 Wolves win in December, 1946.

The goalkeeper on the receiving end of those four goals in 26 first-half minutes was none other than former Wolves man Cyril Sidlow – and we have to point out that Arshavin has been considerably less successful than the legendary ex-Molineux forward by way of a follow-up.

While the Russian midfielder had to settle for an ‘assist’ in Arsenal’s home victory over Middlesbrough four days after his one-man Premier League spectacular, Merseyside-born Westcott built on his special day 63 years ago by doing exactly the same when Ted Vizard’s team thrashed Bolton 5-0 at Molineux a week later.

And that latter individual haul could have been one of five goals if Westcott had assumed the penalty-taking duties. The spot-kick Wolves were awarded in that game was taken by Tom Galley – and missed.

By any standards, Westwood was a prodigious accumulator of goals, netting no fewer than 124 of them in 144 League and FA Cup games for Wolves in a career sadly interrupted at its peak by the war.

Even in the scaled-down football staged during the hostilities, though, there was little let-up as he scored another 90 – explosive form that brought him four England wartime appearances (not official caps) to add to his schoolboy international recognition. He later played for the Football League representative side as well.

Westcott subsequently ran a pub, The Greyhound by Stafford Prison, and also played for Stafford Rangers before dying of leukaemia at the age of only 43 in 1960.

But what is less clear is why he was allowed to leave Molineux in 1948 and join Blackburn, from where he later moved to Manchester City and Chesterfield.

“We wonder whether he fell out in some way with the management or the club,” says Cheshire-based Wolves fan Keith Plant, whose uncle became the second husband of Dennis’ widow Dorothy around 45 years ago.

“Dorothy is still alive and living in warden-controlled accommodation in East Anglia at the age of nearly 90. Her son Peter, who she had with Dennis, lives near her.

“I don’t know Peter or her well but remember being taken to Bushbury Crematorium as a lad, probably on the way to a Wolves game, and laying flowers at Dennis’ tombstone.

“I also recall being told as a child only that Dennis had a blood disease. He is very fondly remembered, though, by the family.”

What no record book will tell us is whether Westcott ever tried to convince a referee NOT to award his side a penalty, as Arshavin did in Arsenal’s win at Portsmouth yesterday!