Life In The Fast Lane

Wolves’ pre-Premier tour to Western Australia in July is sure to evoke memories of the pioneering globe-trotting adventures the club have undertaken in years gone by. But it comes nowhere near the mammoth trip to North America on which they embarked after their promotion-winning season of 1966-67.

From May 27 and July 14, Wolves were re-branded the Los Angeles Wolves and played a stamina-sapping 14 matches in what was called the USA (United Soccer Association) Championship, with the 93,000-seat LA Memorial Coliseum as their home.

Encouraged by TV viewing figures for England’s World Cup victory the previous summer (about 9,000,000 tuned into NBC’s broadcast), interested parties set off in a race to launch ‘soccer’ on the other side of the Atlantic.

To cut a long story short, the United States Soccer Association-approved NASL (North American Soccer League) announced plans for a professional league starting in October, 1967, based on city franchises. But, in the meantime, the NPSL (National Professional Soccer League), backed by media giants CBS, gazumped them with proposals for a competition kicking off in April of that year. The NASL response was to bring its project forward and compete head-to-head with the renegade league. Their strategy was simple: Instead of importing players and constructing clubs from scratch, it would parachute in entire teams. 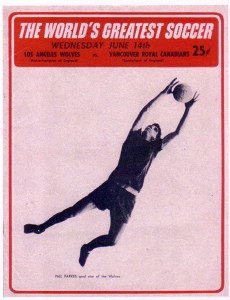 A flying Phil Parkes adorns the cover of the programme for the Sunderland game in LA, complete with maximum hype.

Commissioning Jimmy Greaves and the BBC’s Kenneth Wolstenholme to help with the search, organisers ended up with a host of representatives from Britain. Alongside Wolves were Stoke, Glentoran, Aberdeen, Hibernian, Sunderland and Dundee United, plus Shamrock Rovers from Ireland, Cagliari from Italy, ADO Den Haag from Holland, Bango from Brazil and Cerro from Uruguay.

Each club were assigned to a city franchise and their name adapted accordingly. At least Wolves retained a clear reference to their origin (they were initially going to be playing as the LA Zorros) but some lost their identity entirely, Cagliari becoming the Chicago Mustangs and Cerro the New York Skyliners. In a final marketing twist, the NASL changed the name of the competition to the aforementioned USA Championship, officials claiming it was to ‘make it easier for fans to remember that the league is sanctioned.’ But the patriotic overtones seemed more than a happy coincidence.

Wolves took a squad of 17 – one fewer than the line-up, with subs, they will need in next season’s Premier League – including Derek Dougan, Peter Knowles and Ernie Hunt. Mike Bailey flew out late after recovering from injury. The LA franchise had been bought for a cool $250,000 by sports entrepreneur Jack Kent Cooke, who also owned the LA Lakers basketball team.

The Doog, writing in his autobiography ‘Attack’, caught the mood perfectly. “Clinching promotion with Coventry, we were jubilant……I could not have joined Wolves at a better time, with the thrill of promotion, then a trip to the States to represent Los Angeles.” He continued: “In effect, we were demonstration salesmen and we piled on the sale pressure in 14 matches. In every game, we played superb football. As soon as we arrived in Los Angeles, we were given film star treatment.”

Based in Hollywood at the swish Beverly Hills Wilshire Hotel, Wolves had only 14 days between signing off their promotion campaign at Selhurst Park and pitching up at the brand spanking new Houston Astrodome to take on Bangu (aka the Houston Stars). The 1-1 draw was claimed to be the first professional match in the world to be played on plastic grass, even if the impressive 34,965 crowd had been attracted mainly to the self-proclaimed ‘Eighth Wonder Of The World,’ with its bars, restaurants, padded seats, $2m scoreboard and general space-age ambience, rather than by the reputation of the boys from the Black Country! 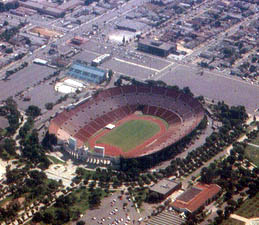 The Coliseum…….Wolves’ home for a month and a half 42 years ago.

Wolves’ success was built on some excellent ‘home’ form at the Colisuem, where their opening 2-1 win (Hunt and David Burnside scored) over Cerro set the tone as it was followed by 5-1 and 4-1 victories against Sunderland and Glentoran respectively. Life on the road was a sterner test, with a 2-1 success in Toronto against Hibernian the only ‘away’ win. One way or another, they racked up thousands of air miles as they zig-zagged across the states by taking in Cleveland, Washington DC twice and San Francisco. It was an itinerary more akin to a rock band than a football team.

According to Bailey, all those hours’ travelling were excellent for team spirit. “I’m absolutely convinced the tour did us good. We tried many ideas, talked a lot about the game and really blended,” he said. It was a sentiment shared by manager Ronnie Allen. “We made a tremendous impact in the States and helped promote the game,” he said. “But what was more important was that my youngsters gained a lot from the fierce competition and really came of age.”

Apart from the matches, the players were able to experience the American way of life as well as meeting the great and good. They became acquainted with pop stars of the day The Monkees, then Tommy Steele took them on a tour of the Hollywood studios where he was starring in ‘The Happiest Millionaire.’ Even screen legend Maureen O’Hara, a Shamrock Rovers fan, teamed up with The Doog for a photo shoot that might have enticed a few Irish-Americans to the area. 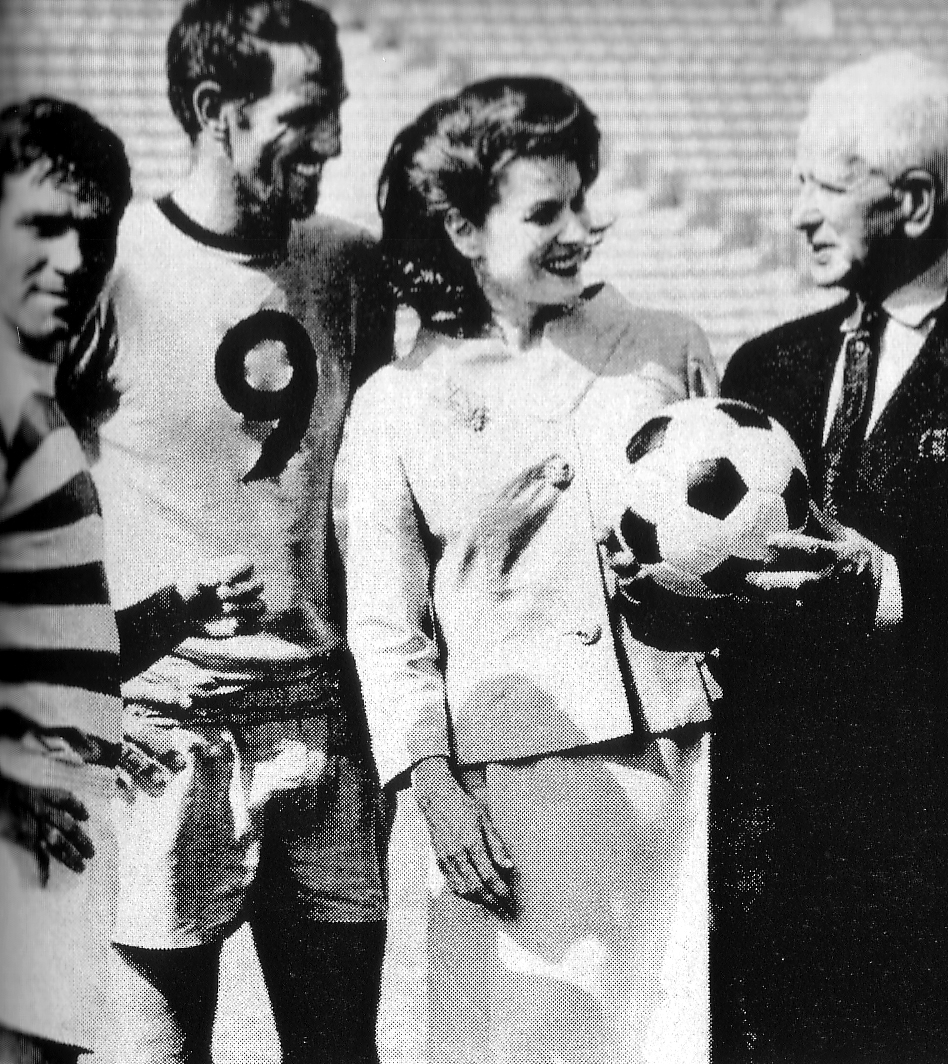 Back on the pitch, Wolves had to replay a match against Aberdeen (the Washington Whips) due to inadvertently flouting the substitution regulations. Northern Ireland champions Glentoran (Detroit Cougars) were kicking up a storm as their games degenerated into fist fights and their player-coach John Colrain was infamously suspended for thumping a linesman during a match against their southern adversaries Shamrock (Boston Rovers). In New York, the fixture between the Skyliners (Cerro) and Mustangs (Cagliari) was abandoned after fans took to the pitch in protest over a refereeing decision and attempted to attack him.

Despite these controversies, Wolves’ excellent form ensured a place in the final against Aberdeen at the Coliseum after they won the Western Division. And some spectacle it was!

An extraordinary game, lasting an unprecedented 126 minutes, saw Wolves home 6-5. Peter Knowles’ early opener was cancelled out by Aberdeen’s Jim Smith but the real fireworks started around the hour. Twice in four minutes, Dave Burnside brought Wolves level after Frank Munro and Jim Storrie edged the Dons – sorry, the Whips – ahead. After Smith was given his marching orders, Burnside completed his hat-trick and the trophy was in Wolves’ grasp as they led 4-3. But the pesky Munro equalised again with a last-minute penalty.

As the teams went into extra-time, The Doog slammed home Wolves’ fifth and Aberdeen looked a beaten team when Terry Wharton stepped up to take a penalty near the end. But Jim Clark saved it and, sensationally, Munro popped up in the last minute to not only complete his hat-trick but also bring the scores level at a remarkable 5-5.

The match was to be decided by ‘golden goal,’ with the next side to score the winners. Not surprisingly, Wolves’ numerical advantage told on a stifling, humid night and it took only another six minutes for Ally Shewin to deflect in Bobby Thomson’s cross – and for Wolves skipper Dougan to lift the trophy.

A spokesman said: “The Wolves have been a delight to know and to watch in action. We couldn’t have had more capable representatives. To a man, they were personable, friendly and fun to be with.” One of the valuable legacies of the trip was the signing of Munro. So impressed was Allen with his performance in the final that he was brought to Molineux the following January for a bargain £55,000.

In the meantime, the renegade NPSL dragged on until October amid a lot less enthusiasm than the official championship. It was clearly not helped by the brutally frank assessments of CBS analyst and former Northern Ireland captain Danny Blanchflower of the quality.

In December, 1967, the USA merged with the NPSL to form the North American Soccer League (NASL). As a result, LA Wolves became founding members of the new league and players were recruited on an individual basis. After finishing third in their division, LA were one of several franchises to fold after only two seasons.

The idea of importing teams to represent franchises was revived during the 1969 NASL season and Wolves returned to the United States, this time representing Kansas City and winning the NASL International Cup. But that’s another story….. 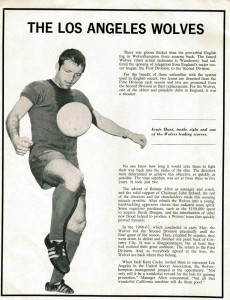 Ernie Hunt in the news – and getting a sweat on in LA. 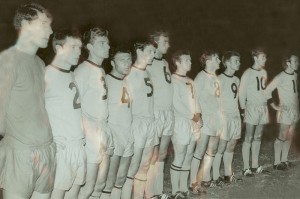 * Jim Heath is a regular contributor to A Load Of Bull and is grateful to the stunningly authoritative Soccer In A Football World (David Wangerin) and to Clive Corbett’s excellent 1964-77 Wolves history, Those Were The Days.