Evans On The Record, Thirty Years On 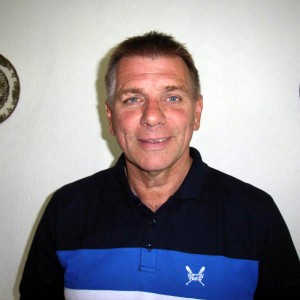 He now sounds more Aussie than Midlander but Alun Evans has certainly not forgotten his roots.

Welcoming us to the bungalow to which he moved with his parents at the age of 15, the man who achieved fame by becoming British football’s first £100,000 teenager is happy to talk……about the mistake in the record books, his Molineux upbringing and THAT nightclub attack.

For our part, we’re just happy to have caught up with him. He has lived for three decades in Melbourne but is currently ‘home’ for a few weeks – and that means Kidderminster, not one of the smaller towns in North Worcestershire.

“I’ve often read that I was born in Bewdley but that’s wrong,” he points out for starters. “That’s where the registrar or births was based. I was born in Kidderminster.

“I used to live in this house and I come back here around this time each year – earlier last time because my father passed away in the January.”

Alun Evans Snr played a few games for Albion as well as for Wales in wartime internationals but his son, who is 60 in September, first made his name in Wolves’ attack in the side adjusting to life back in the top flight following promotion in 1967.

His debut came in a victory at West Ham, he netted a last-minute winner against Burnley in his first home game a week later and a subsequent goal at Anfield was to have great significance the following season.

Evans, the junior member of the squad whose 1967 Los Angeles Wolves triumph is described in detail elsewhere on this website, was fortunate enough to have good mates and good role models at Wolves. 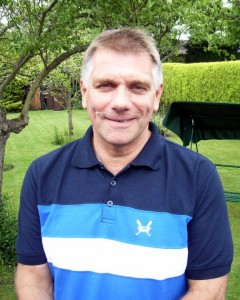 “Ron Flowers was captain when I first came here and I remember him having a moan at me when I was a bit too eager in a practice match one day! he added. “Senior players never like being worked too hard by the youngsters in training.

“I used to room with Phil Parkes around the time that Peter Knowles was in his prime. What a talent he was! He was very close to George Best’s talent.

“We used to be given £10 a day allowance in America and Knowlesy would save his. I think he got married soon after we came home.

“We used to go out together back in Wolverhampton and he had the white sports car and smart suits. He was a real Jack the Lad and good-looking with it.

“Then there was The Doog, who would look after us really well. He was a big, strong bloke and nobody messed with him, a good centre-forward.

“Wolves had a really big staff in those days and some good players who didn’t quite make it. I always thought John Farrington could have been an excellent winger but he lacked confidence.”

No less a judge than Bill Shankly saw enough in Evans to take him north to Liverpool for a six-figure fee after only 22 appearances and four goals for Wolves.

The player himself believes the hard time he gave Ron Yeats on his first senior visit to Merseyside was a strong contributory factor behind his move, which was sealed amid typical Shanklyisms.

“I was just called into the office at Wolves and told I was going to Liverpool,” he recalled. “I jumped in the car with my father-in-law, I think it was, and I signed pretty quickly.

“Shanks had a growl at me, though, when I said I expected to work my way into the side via the reserves. He said: ‘I wouldn’t pay £100,000 for you or anybody else unless it was to play in my first team. You’re facing Leicester on Saturday.'”

A goal past Peter Shilton in that game immediately endeared Evans to The Kop, although Wolves fans weren’t so enamoured when he returned to Molineux for only his third Liverpool game and scored twice in a 6-0 victory that still sends a shudder among Wanderers fans of a certain age. 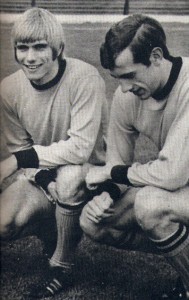 Under John Holsgrove's close attention - for once.

“John Holsgrove was marking me and I always thought I had a bit of a hold on him, even in training,” Evans says.

“It didn’t make much difference to me that the goals came against Wolves. I just enjoyed playing football and did my job. It was that down-to-earth attitude that made sure I never found the £100,000 fee a burden. I always did my best, whoever we were playing.”

Cue the tentative questions about the dreadful assault Evans suffered on a return visit to the town some time later. Was it football-related? An out-of-control fan perhaps who didn’t take kindly to his exploits at Wolves’ expense?

“It was nothing like that,” he assured us. “Nothing at all to do with supporter rivalries or anything I did or said.

“I was just out with my girlfriend at the Oasis nightclub on the edge of the town. We were watching a cabaret when this guy came at me with one of those beer glasses with the dimples in and smashed it into the side of my face.

“There was blood everywhere and the bouncer took me to hospital where I was given nearly 70 stitches. I healed okay but was badly scarred. I found out that the guy who attacked me was out of prison on remand at the time.”

Evans’ career struggled to live up to the price tag placed on him at 18. Although he scored against Everton in Liverpool’s FA Cup semi-final victory of 1971 and appeared in the final defeat against Arsenal, greatness in a side under reconstruction eluded him.

A Fairs Cup hat-trick against Bayern Munich was the last of his big Anfield highlights before he was squeezed out by a certain Kevin Keegan and sold to Aston Villa.

Seventy-two games and 17 goals there included the winning of a League Cup medal in 1975 and were followed by a stay of 100-plus matches for Walsall – and then a life-changing move to the far side of the world.

“Dave McLaren, who was a Wolves goalkeeper in the mid-1960s, was running South Melbourne Hallas and he took me there,” Evans added.

“I went with the intention of considering my options after a year but spent five seasons with Hallas in the National League and then had one with Morwell, who had just won promotion to the same league.

“I broke my leg and retired at 35 but got married out there, so I stayed. Frank Munro came out as well after me, as did Bertie Lutton and a lad called Sammy Wright who didn’t make the first team at Wolves.

“I’ve been a painter and decorator for the last 20 years and have four blokes working for the small business I run. We’re coping okay with the recession at the moment and it’s well enough established to manage without me for a few weeks.

“I did other jobs out there as well while I was still playing, like working on the fish market and selling old cars. I had no qualifications because I’d only played football.

“I have a son in Australia now and a daughter Abbey, who has come over here with me. And I have another son living at Dunstall Park, so there are family members around here to see.

“And of course I’m delighted to see the Wolves promoted. It would be great now if they could hold their own in the Premier League.”