Goals Then Gloom For Neil 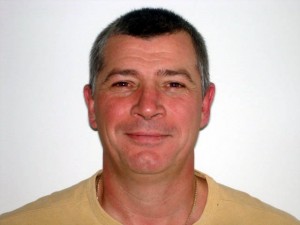 Which Black Country-born striker went into Wolves’ side in the mid-1980s and netted seven goals in his first 11 League games?

It’s not Steve Bull, whose scoring record over a similar number of matches just over a year later – and a division lower – was a more ordinary four.

It’s a lad who arrived with an even bigger bang and who, sadly, disappeared from view almost as quickly, a victim of football’s occasional knack of dispensing cruel injury misfortune.

Neil Edwards played for Oldswinford – “three or four divisions below the Conference” – against Wolves on Tuesday, August 13, 1985. Two days later, he signed for them and another two days on, he hit a tremendous solo goal on his debut in a Third Division game at Brentford.

In the club’s most impoverished era, the then 19-year-old struck again in what remained of that late summer against Derby, York, Bristol Rovers and Plymouth before bagging a match-winning brace at Rotherham.

A potential star had been unearthed by Sammy Chapman – an expert scourer of the bargain basement – but Edwards badly damaged his cruciate ligaments against Walsall in mid-October.

He didn’t play again until the first day of the following season, by which time Andy Mutch had been signed from Southport. Bully followed from Albion in the November.

Edwards was in and out of the side as a result, couldn’t add to his goal tally and seemed cursed when carried off in a 5-2 win at Burnley the following February.

“There were only a few minutes to go when this lad clattered into me and took me out,” he said. “I knew I had a break because my ankle was at right angles to where it should have been and the bone was pressed right up against the skin.

“Bully and Mutchy were well into their stride when I returned against Newport the season after and I went into non-League with Kettering.

“Of course I wonder what might have been but these things happen and you just have to get on with your life.

“I should have made it into the League with Kettering but we missed out on the title when we should have won it and, because I met a girl while I was playing there, I turned down a possible chance to go with Alan Buckley to Grimsby.”

After a two-year spell at Rockingham Road, Edwards moved to Corby and then Rothwell while making plans to pursue a career outside football.

As a result, he has worked for 18 years as an engineer for Weetabix, whose head office is in the area. “I help mend the machines that produce the product,” he says. 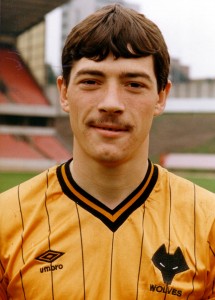 The young hopeful more than two decades ago.

“We’re happily settled down here but I stay in touch with a few of the other Wolves lads like Jon Purdie, Dean Edwards and Tim Flowers.

“I also play for the Wolves All Stars side, although the knees slow us all down in the end and you tend to play deeper and deeper!”

* Edwards was one of four Wolves debutants in the 3-1 defeat at Brentford in August, 1985. The others were Purdie, Nicky Clarke and John Morrissey.