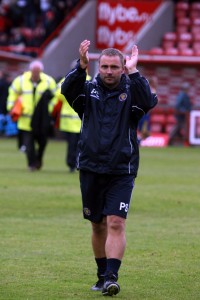 Paul Simpson - one victory away from another promotion triumph. Picture courtesy of Shrewsbury Town.

Paul Simpson will be aiming for the sixth promotion of his career when he leads Shrewsbury out for their League Two play-off final against Gillingham on Saturday.

The 42-year-old, whose model-pro status as a player made him appear a natural to eventually step into coaching and management, has already gone up with four different clubs in one or other of his two guises.

And the former midfielder, who played in the 1998 FA Cup semi-final for Wolves against Arsenal, said: “Hopefully we’re in for a great occasion at Wembley.

“The win at Bury in the semi-final second leg set us up for a wonderful day out but we all know it’s only winning there that would make it really special.

“We have a tough test ahead of us against a good side but we have a lot of confidence from what we have achieved in the last few weeks and are going into the game in good spirits.”

We at www.wolvesheroes.com were honoured to be asked by the Football League to provide an in-depth interview with the Shrewsbury manager for Saturday’s match-day programme.

And he spoke during our conversation of the feelings he will have as kick-off time approaches at the spectacularly reconstructed stadium.

“When I went out for the pre-match formalities with Blackpool at the Millennium Stadium a few years ago and then led Carlisle out for the Conference play-off final at Stoke in 2005, I wondered what it must be like to make the same walk at Wembley,” he said.

“Now I’m going to find out. I’m a very proud Englishman and to have this honour at England’s own stadium is going to be very special.” 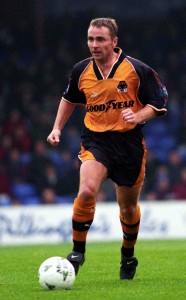 Simo in action during his 62-game Wolves career.

Simpson, whose promotions to date have come with Manchester City, Derby, Blackpool and his home-town club Carlisle (twice), was an enthralled onlooker as Shrewsbury overcame Bury in what proved to be one of the most thrilling of the recent semi-final second legs.

His side were trailing 1-0 from the first game and took the return at Gigg Lane into extra-time only by scoring with two minutes of normal time left.

They then survived the sending-off of Stephen Leslie to hang on and prevail on penalties – thanks largely to a colossal performance from their on-loan keeper Luke Daniels.